The bearded Leviathan – not your everyday Basilosaurus

Basilosaurus – the great mammalian leviathan of the Eocene – was beyond doubt one of the most spectacular creatures which ever swam the oceans of the world.  But despite the fact that fossils of this ancient cetacean have been known since well more than one and a half centuries, many aspects of its anatomy and biology still remain enigmatic. I´ve written in an older blog article why archaeocetes were surely not the skull-headed and shrink-wrapped pseudo-reptiles as which they are usually depicted. They had surely much more soft-tissue around their skulls and necks than most people think, and also nearly certainly possessed  well-visible and functional vibrissae (see here why). Dominic Grabowski recently created this truely wonderful life-depiction of a chunky Basilosaurus with volumous upper lips, and countless fine vibrissae on its chin and upper lips. 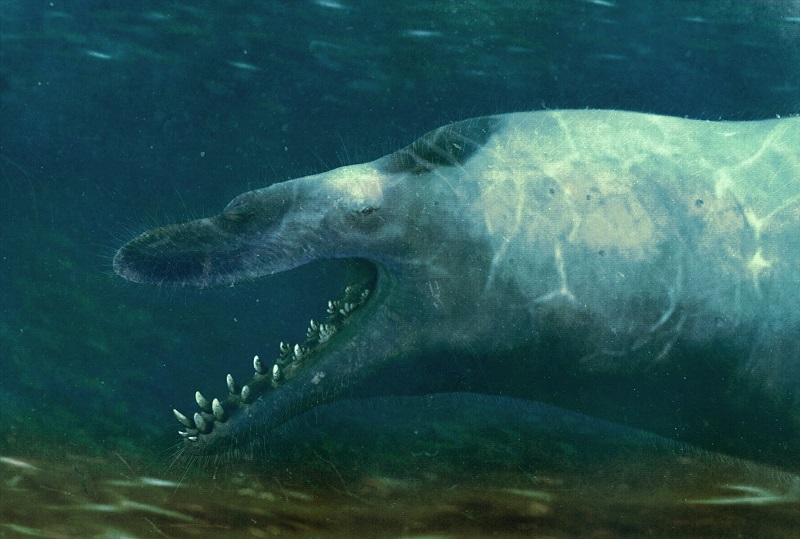 I think this is really one of the most life-like depictions of an archaeocete I have ever seen, and despite its unconventional appearance, it really doesn´t look wrong. Dominic managed to blend the features of a whale with those of a hippo in a really good way. If you take a close look, you can even see fine isolated hairs covered the rest of the body. This is of course fully speculative, but plausible. We just have no idea how and when exactly whales lost their fur. With few exceptions like walruses and to a lesser extreme degree elephant seals as well, modern seals have all a fairly well developed coat. So were those derived but still partially amphibious protocetids like Maiacetus still fully covered by fur as well?

Well, we´ll just never know. But those animals mainly lived in comparably warm subtropical or even tropical areas, and I could well imagine that they lost most of their coat at a quite early stage – similar to modern hippos and the even more terrestrial pygmy hippos. And it´s really interesting to keep in mind that they didn´t just lost their whole fur, but just highly reduced it, similar to other „bald“ mammals (including humans). Hippos and even manatees and dugongs have fine isolated hairs all around their bodies. It could be possible that they have some tactile function, similar to the more specialized vibrissae in the facial area, and it seems not unplausible that such hairs could have been still present in animals like Basilosaurus.