Cetaceans are doubtless some of the most marvelous and most fantastic mammals which ever evolved. Nearly everything on them is weird by normal standards, even more so if you look at all the incredible anatomical adaptions of the original mammal bauplan.

One of th best ways to see this, is to take a look at a full whale skeleton, and one of the best places to see some of them is Fuerteventura. There are several mounted skeletons on various part of this small Canary island. One of the most impressive ones is from a 15 m long sperm whale (Physeter macrocephalus), which beached at Matas Blancas in 2005. Its skeleton is now on display near the lighthouse of Avenida del Saladar.

Full mounted skeletons of big whales are for obvious reasons rarely exhibited in museums, and if they are, they are often surrounded by a lot of other exponates or not visible from all directions. Not so in this case. You can even walke below some of the larger cetacean skeletons.

Here a photo which shows the huge cranial vault for the spermaceti organ:

Situated on high columns in front of the sky, they look nearly a bit like bizarre flying sky beasts.

Another photo of the skull, which shows the nearly ridiculously thin mandible of the largest predatory mammal which ever lived. 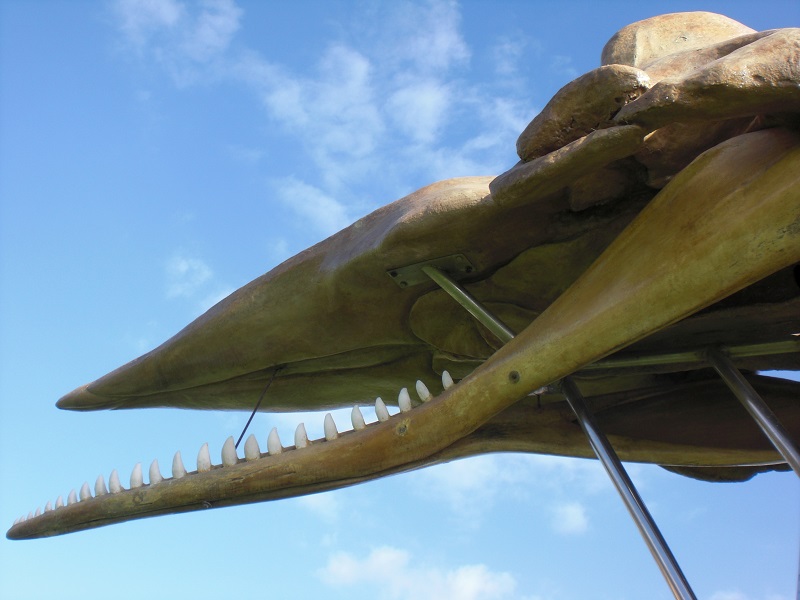