The modern nautilus is usually seen as some sort of archaic relic from an ancient era, unaffected by the changes of time. They are often considered as an anachronistic remnant of an age when the seas were populated by marine saurians and ammonites. But this animals are much more diverse than most people think. Even long after the extinction of the ammonites, which had been a dominating element of the oceans over hundreds of millions of years, the nautilus family still thrived. There is also not just one modern nautilus species. Besides the well known Nautilus pompilius, there are – depending on morphological or genetic differences – from two to six other species.

This includes Allonautilus, a highly elusive cephalopod genus which had been known for a long time solely from floating shells. There are two known species, A. perforatus and A. scrobiculatus. It was already assumed to have gone extinct, until living specimens of A. scrobiculatus were found in 2015. Allonautilus differs significantly in the shape of its shell from Nautilus, but even more so in other traits. The hood or lid on the top of the head which is also used to close the opening of the shell is dark purple in color. It is covered with more and denser tubercles than the lid of Nautilus and is also very different in overall shape.

Allonautilus is also called the fuzzy nautilus, because its shell is covered by a yellowish fine fuzz, whose function is still unknown. 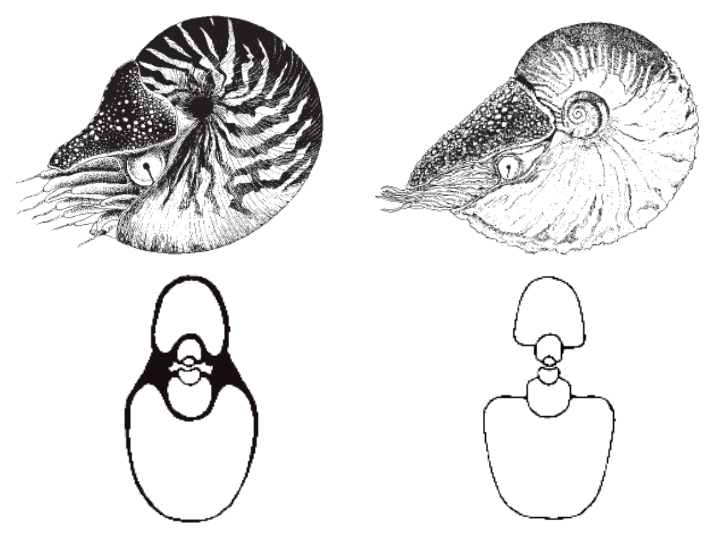 Interestingly it seems that Nautilus and Allonautilus are paraphyletic and that Allonautilus evolved from Nautilus. This is also important considering the age of Nautilus, which is apparently also not older than around 60 million years. A. perforatus shows also a unique ribbing of the shell, which is not found in any other extant Nautilus species. How the rest of the animal looks in life is still unknown. 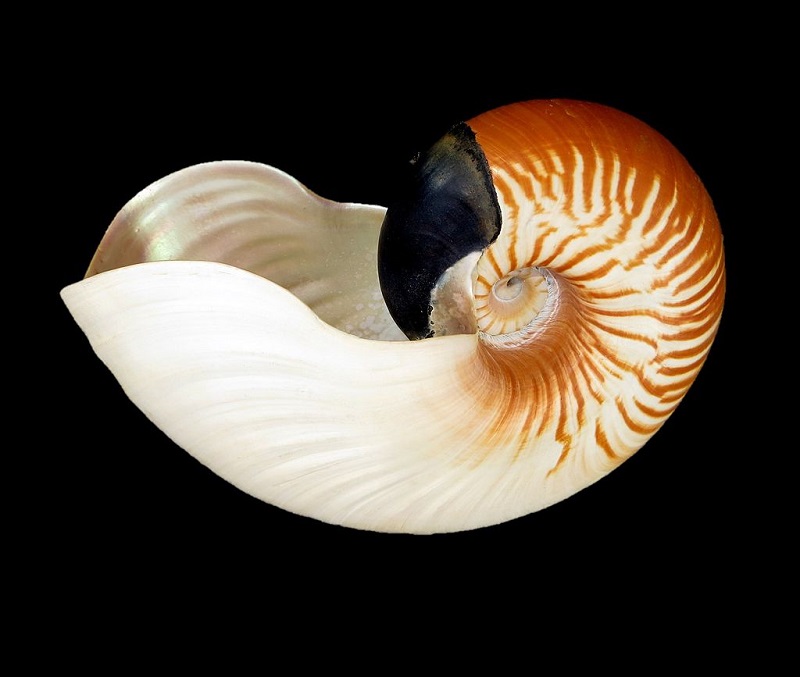 As primordial as they may appear today, the Nautilida kept on evolving within the last 65 million years, and the modern species are no unchanged living fossils, but the products of ongoing evolution.

I want to show you now some examples of post-cretaceous Nautilida fossils, which significantly differ from our modern species. I start with Nautilus imperialis, which lived in the early Eocene. It was much larger than its modern relatives and reached nearly the diameter of a football. It was also quite compact in overall shape. I tried to made a life reconstruction based on some fossil specimens from the Naturkunde- und Mammut-Museum Siegsdorf. This was one of my very first tries with digital painting and only done with a mouse instead of a graphic tablet, so there is still a lot that could be done better. I tried to give it a recognizably different appearance, with a different pattern and color scheme of the shell and soft body, and a different spape of the lid. Of course this all is still fully speculative. Cephalopods are surprisingly conservative in color, and we find various shades of reddish purple to brown, often coupled with white in most species, from squids to cuttlefish, octopi, vampiroteuthids and nautiluses. On the other hand we find such weird things like yellow fuzz in Allonautilus scrobiculatus nobody had ever expected…

So I made it still not too different from N. pompilius, with a more extensive red area of the shell, lesser distinctive stripes and a different shape of the lid with small but numerous tubercles.

To give it a bit more life I tried to add some background scenery, four additional nautilus specimens and an archaic whale. 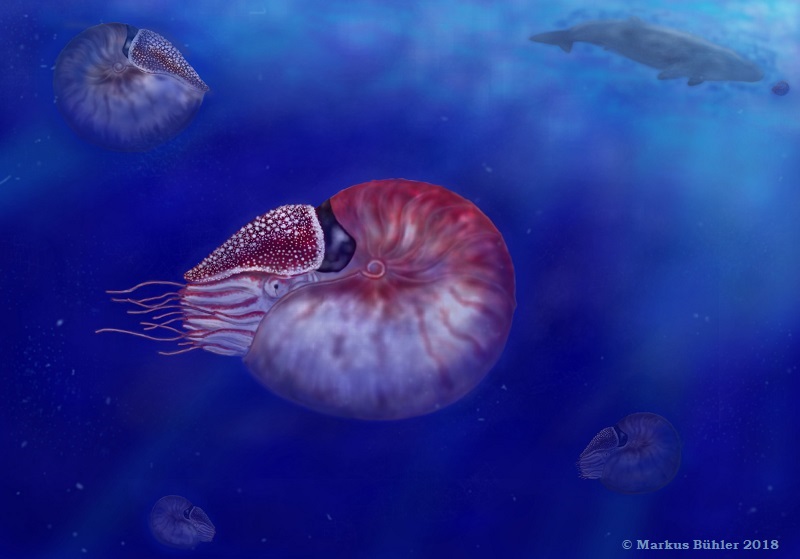 I used two fossils of N. imperialis fossils from the museum at Siegsdorf as references. They are 50 million years old and admittedly I don’t know if the derived fully aquatic archaeocete is not already somewhat anachronistic, as it would be around 10 million years younger. But I could not find more references when N. imperialis or very similar forms became finally extinct. There is even some speculation that the rise of marine archaeocetes was the driving force behind the reduction of nautilus diversity. 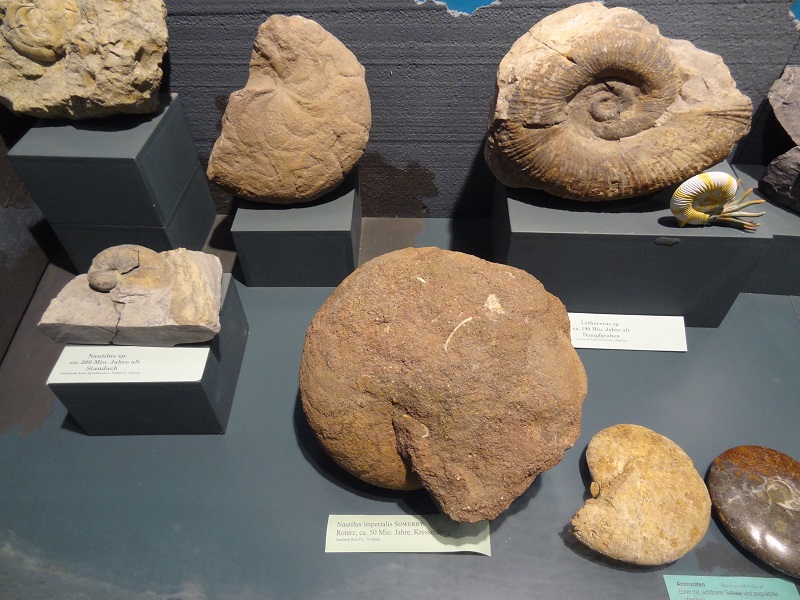 Another fossil of N. imperialis, which shows quite well the very compact shape of the shell: 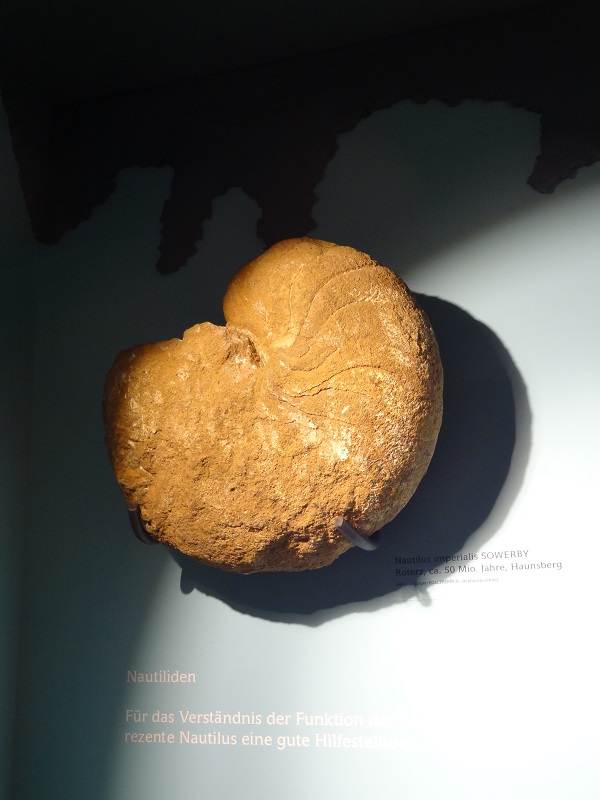 Here you see the fossil together with some modern Nautilus shells for comparison: 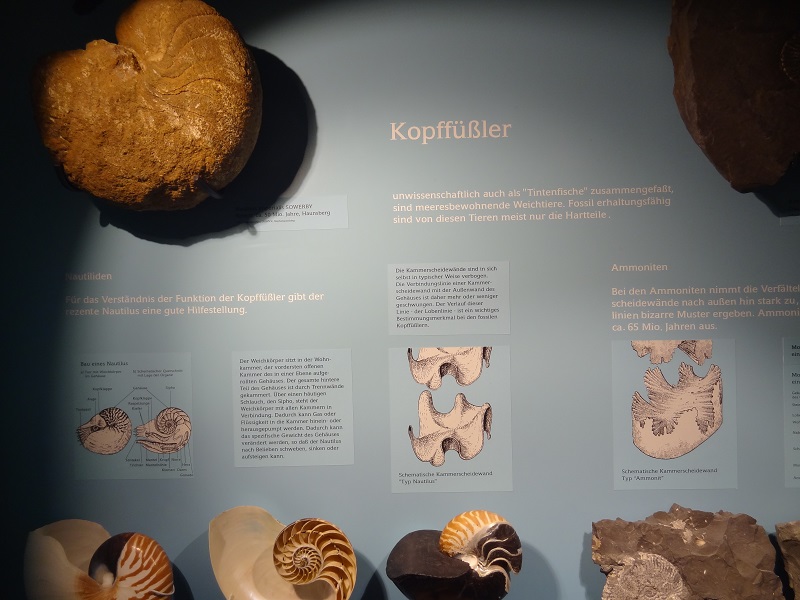 Many thanks here also to Joschua Knüppe who gave me many highly helpful tips for the use and effects of colors and light underwater and the work with digital graphic programs. At the end this project which was only an intention to make a life reconstruction of N. imperialis for this blogpost at first, turned into something on which I worked several hours a day over a whole week. I am still not happy with a lot of details, but anytime I decided to make a break.

Here are some more fossil nautilus shells from the same museum: 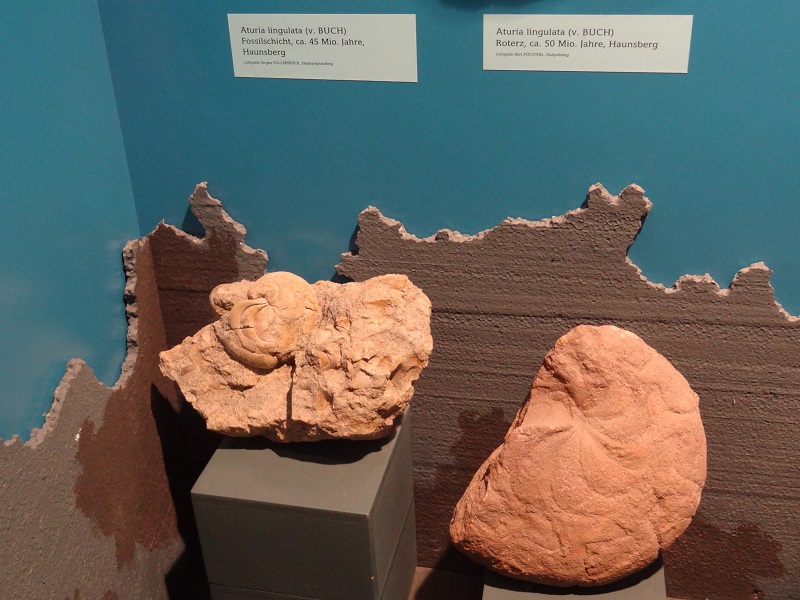 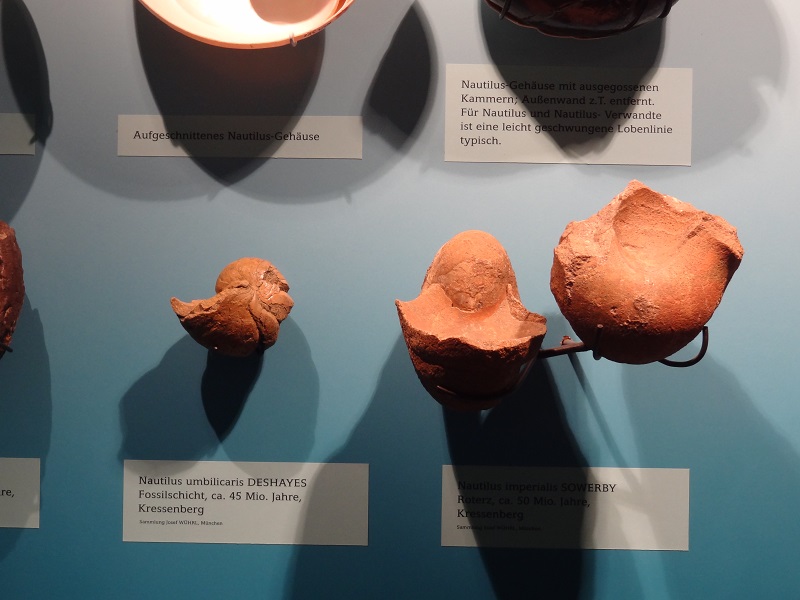 This Arturia shells have highly ornamented shells, very unlike the Nautilus shells we are used to see today. 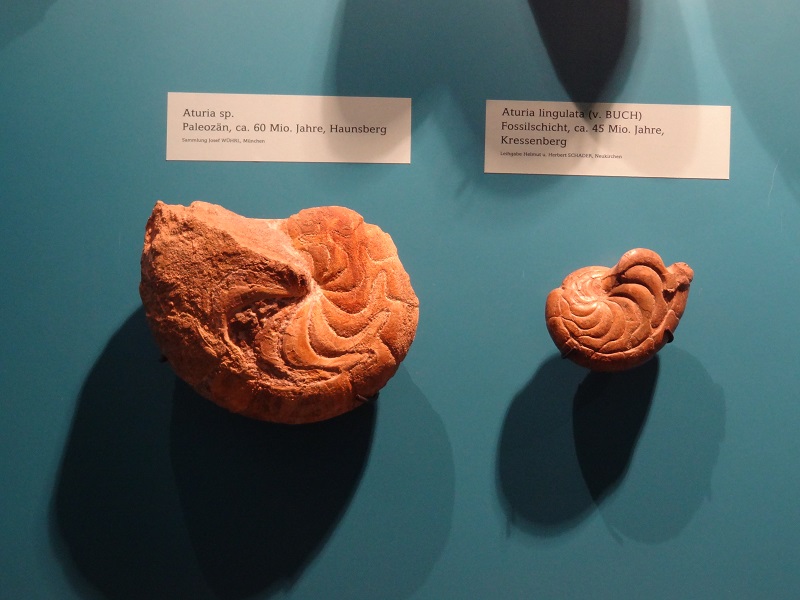 With this blogspot I also hope to evoke some more general interest in the lesser known post cretaceous marine fauna which did not just consist of Megalodon and some archaic whales.

This is also meant as a hint to all those readers who create paleoart. If you make life reconstructions of archaic whales or other postcretaceous marine mammals, you can give your art much more life and informative depth by adding not just some random fish or invertebrates, but real contemporary fauna. Animals like those big or elaborate nautilus species are practically absent in paleoart. Perhaps this blogpost will inspire some of the many people who are much more skilled artists than myself to draw or paint anytime their own reconstructions of postcretaceous nautiluses, either as a main sujet or accompanying other marine fauna. 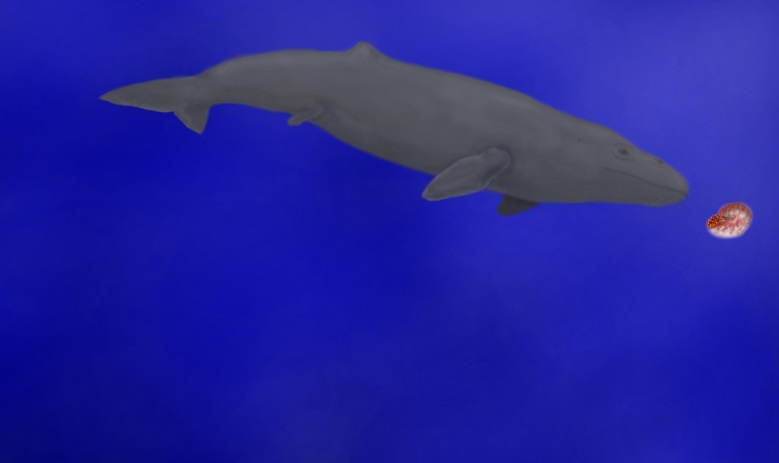 Random archaeocete with a nautilus from the background of the bigger screen, before it was covered by shadows and light effects. Sadly the vibrissae on its lips are hardly visible here.