A moustache for the elephant bird – had Aepyornis facial bristles?

A recent study in which digital endocasts of elephant bird skulls from Madagascar were examined, has shown that those gigantic flightless birds had extremely reduced optical lobes. At the same time, their olfactory lobes were very large, what indicates that Aepyornithids were likely noctural and used their keen sense of smell to find their food.

This reminds a lot on another kind of weird flightless birds of our modern time, the kiwis from New Zealand. Kiwis have very poor eyesight and find their food items – which are mainly earthworms, insect larvea and other inverbetrates – by probing the ground with their highly tactile beaks. One novel trait of kiwis are their nostrils, which are extremely close to the tip of the bill, what allows them to literally smell underground.

The foraging habits of elephant birds were surely quite different, as they were mainly herbivorous. This whole study is really fascinating, and I recommand you to read it yourself, as I don´t even want to go too much into its details. The motivation why I write this blogpost has another reason. If elephant birds like the studied species of Aepyornis maximus and Aepyornis hildebrandti had very poor eyesight and were possibly noctural, is it really that likely that they just relied on their sense of smell in the darkness?

I don´t really think so, nor do I really believe that they were blind as many recent headlines boldly claim. Reduced optical lobes do not mean that an animal is fully blind, nor would it make really sense. Even animals which mainly rely on other senses like smell or echolocation, for example shrews or bats, can still see, even if this is not their main sense. Kiwis have also a reduced optical sense, yet they aren´t blind at all. A strong sense of smell alone also does not help a lot for orientation in a forest or scrubland, especially if you´re a giant bird of 3 m height. The orbits of elephant birds also do not indicate a reduction of eyeball size as seen in kiwis, so the claim that those birds were really blind seems quite dubious to say it at least. Cassowaries have also a keen sense of smell and are mainly noctural, but show no reduction of their vision.

But even if elephant birds really had an extremely strong sense of smell and a really weak (but not absent) vision, is it possible that they used also another sense for orientation or to pick up food items like fruits? If we look at modern kiwis, we see some extremely long whisker-like feathers near the base of their beaks. They act like the vibrissae of mammals as sensory organs, what´s surely especially important if they have their heads within leaf litter, vegetation of very close to the ground, and to avoid injuries from branches, thorns or stones. So is it possible that elephant birds had similar sensory bristles? If they really had similarly weak vision as kiwis, this seems really quite likely. But I really have to emphasize that this is just speculative so far. A close examination of the invervation of those feathery bristles and their connection with the bigger cranial nerves and corresponding brain areas in kiwis could surely help to see if this structures could have been present in elephant birds as well.

I made this illustration of an Aepyornis maximus with some bristles at the base of the upper beak to give you an idea how this could have looked like. The silhouette depiction made it possible to create this within a comparably short time and to avoid the depiction of the eyes at the same time. Compared with those of kiwis, the bristles are even comparably short and subtly depicted. 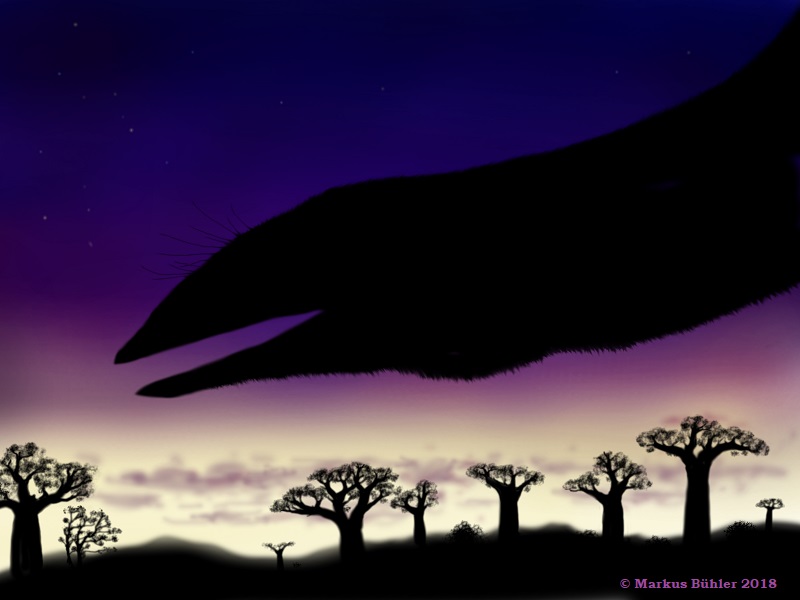 For comparison the head of a taxidermy kiwi specimen which shows the really long and space-consuming bristles which forms some kind of sensory shield around the facial area. 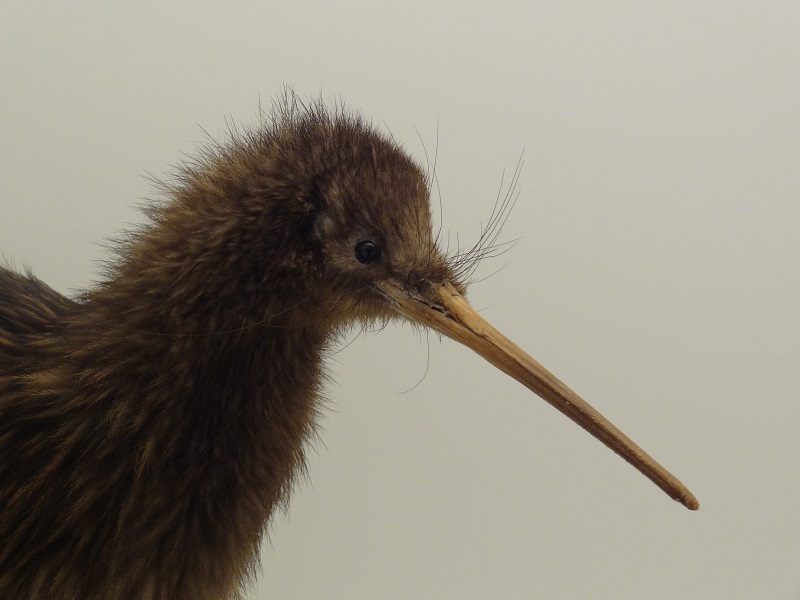 If elephant birds really had bristles similar to those on my illustration, or even more extensive as those we find in kiwis, this already highly unusual birds would have been even much more bizarre than we already thought. This makes it even more tragical that we missed those enigmatic creatures just for a few centuries, and much of their anatomy and biology will still remain a mystery forever.

It is also interesting to take a look at some modern large flightless birds. Rheas have also bristle-like feathers around the corners of their mouths, the base of the beak and around the eyes. 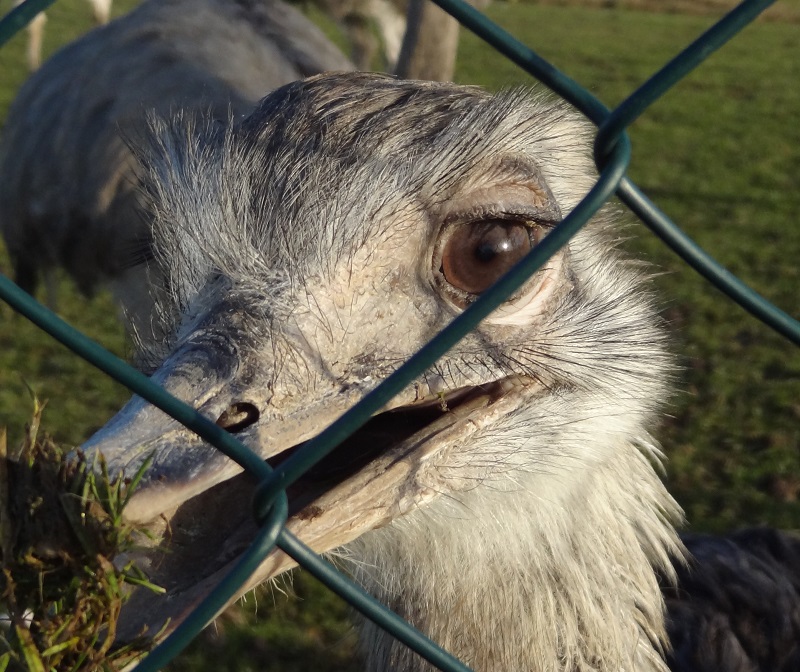 We see a similar condition in emus as well. Even if this could have an additional function to protect the eyes and ear openings from dust and dirt, it seems also likely that they could have a sensory function to avoid injuries of the facial area when they pick for food. 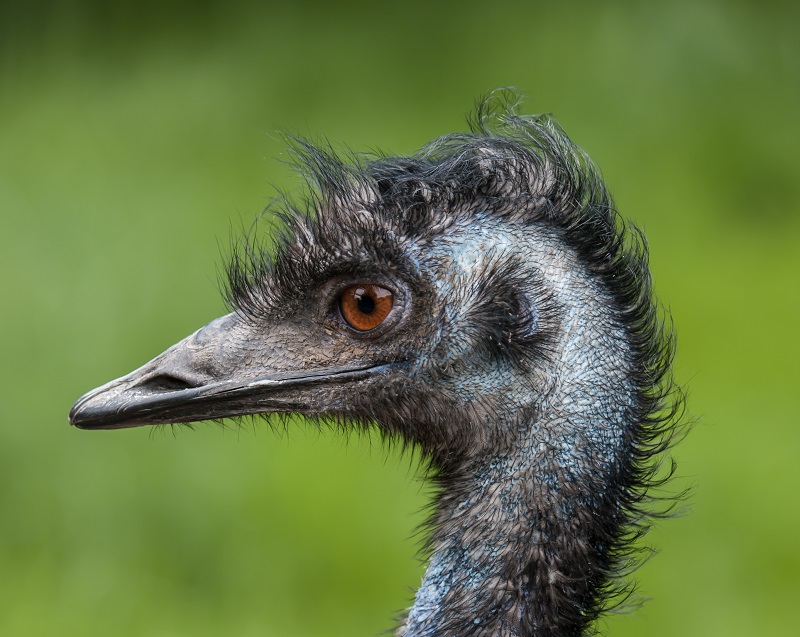 Ostriches have also very long fine feathers, which were especially well developed at the upper base of their beaks. They don´t show the bristle-like nature as those of kiwis, which differ significiantly from the surrounding plumage. 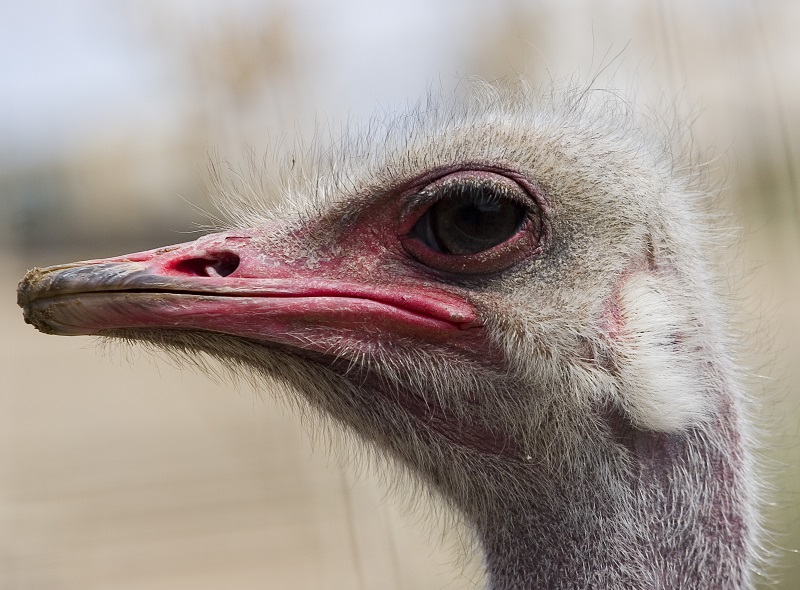 Now the weird thing is that cassowaries fully lack such bristle-like feathers around their mouth or beaks, and it is hard to say why. It is still really strange, as cassowaries are among all those modern flightless birds here the ones which live in the most densely vegetated habitats. Perhaps their strong ceratinous frontal shields prevents them from most injuries. If you take a close look at this photo, you will also notivce the position of the nostrils, which are pretty close to the tip of the beak. 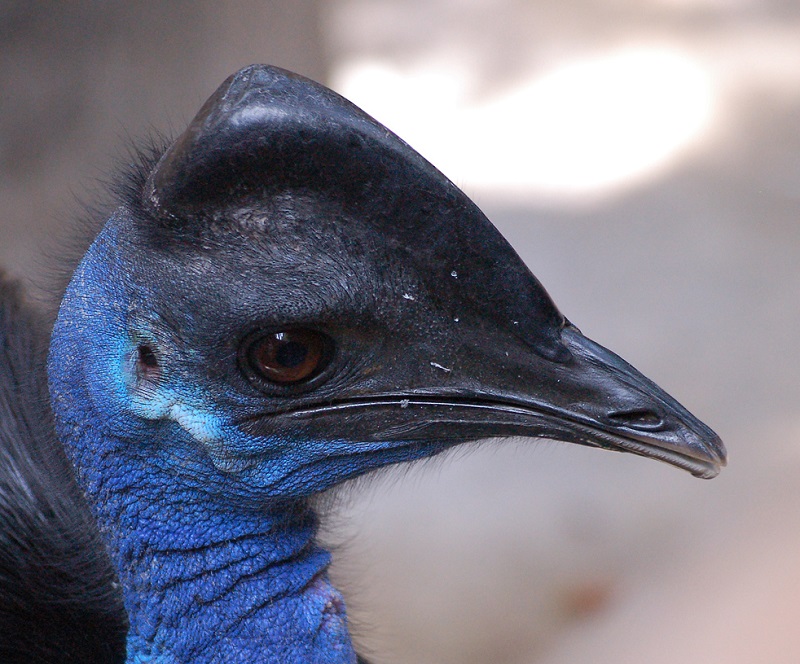 So again we see that soft tissue reconstructions from animals only known from their bones remain a challenge with a lot of unsolved questions.

References used for this article: