Mass gatherings of mating common toads (Bufo bufo) are probably among the most spectacular herpetological phenomens you can see among European amphibians. It is really an incredibly sight to see dozens or even hundreds of this usually quite solitary anurans gathered together. It is not only interesting to see such a large number of individuals with all their range of intraspecific variation, but also to see a lot of fascinating, weird and sometimes even quite obscene behavior. 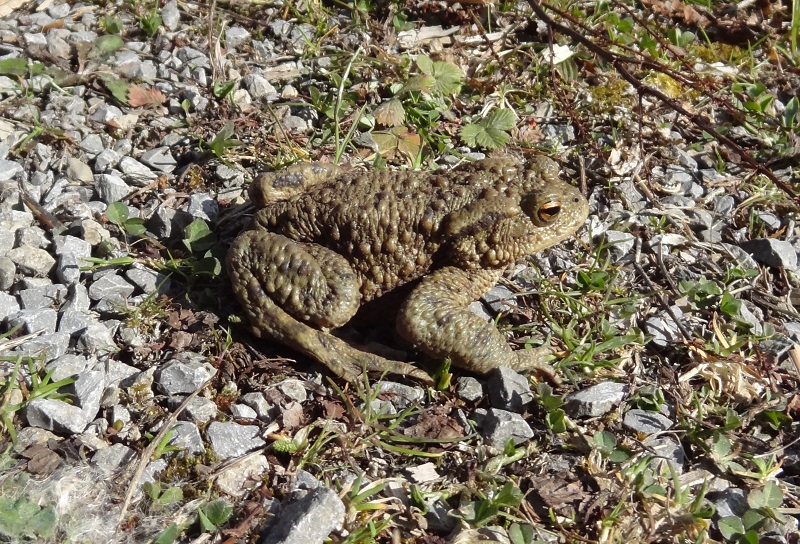 At the end of March I visited a pond which is every spring visited by mating toads. I found only a few specimens in the water, some toads were even still walking or sitting around on land set back from the pond and apparantly on their last steps of their journey to the mating ground. 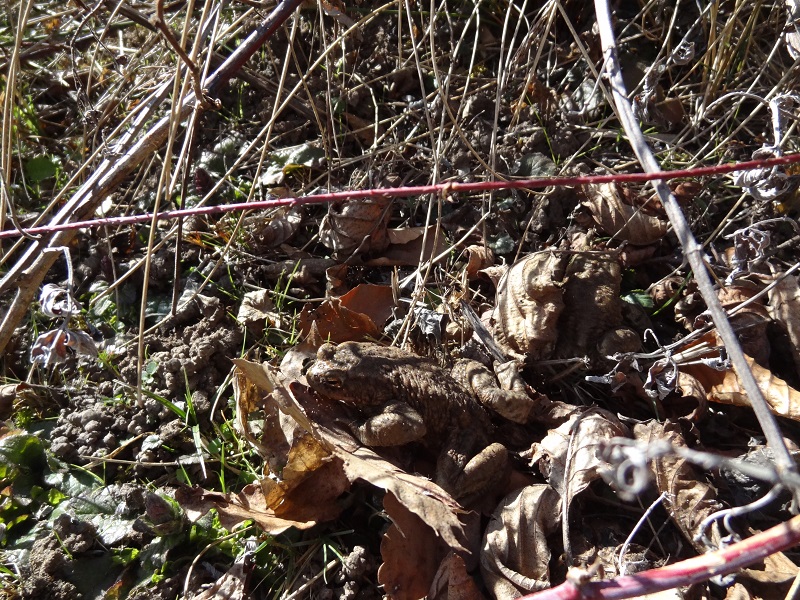 One male toad jumped on the shoe of a young boy who visited the pond with his grandparents. I don´t think he knew what the toad was going to do when it clinged to his foot. 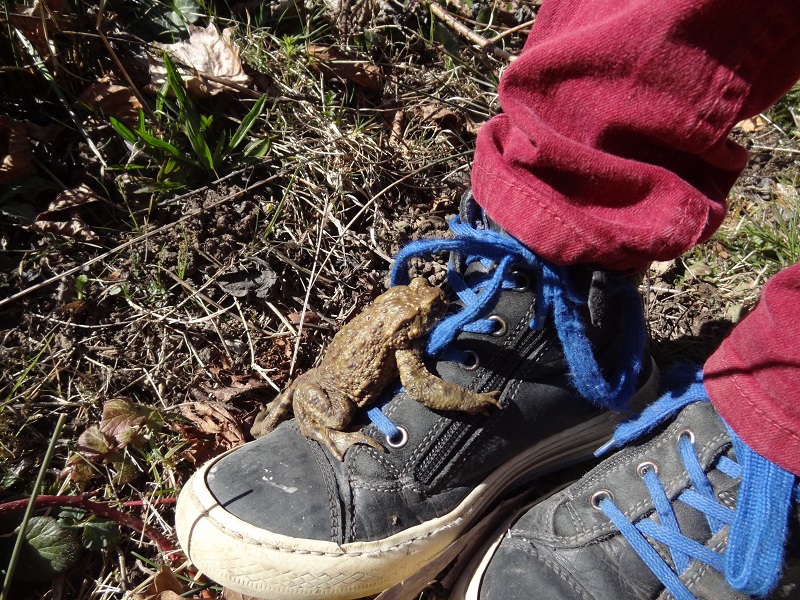 It tried to perform the amplexus, a mating behavior in which the males grab the females with their arms and cling on their backs. 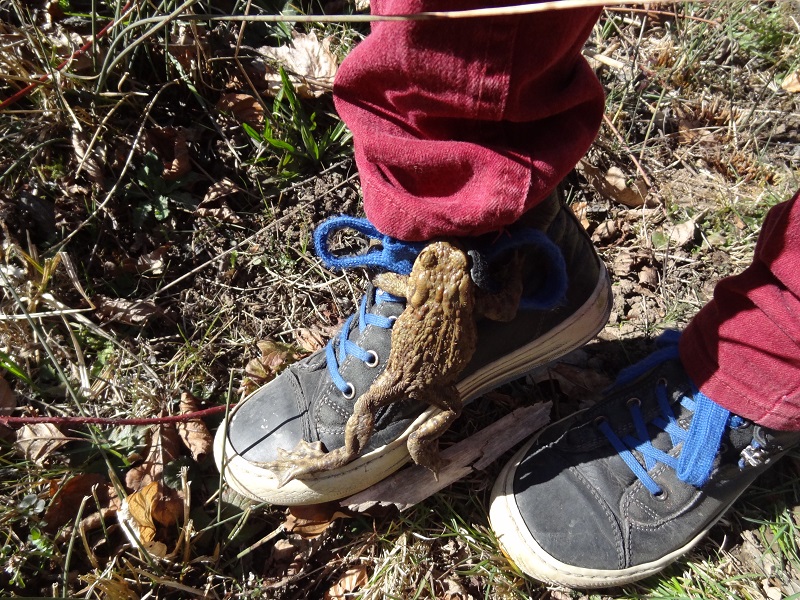 Some of those male toads have a quite extreme sexual urge, and are quick to try to mate with just anything, including other amphibians or even inanimate objects.

When I came only a few days later again on the pond, the weather was now already much warmer, it was just full of toads, sitting and swimming around, and of course – mating.

Here is a photo of a large female which was sitting in the gras, surprisingly still without a male. 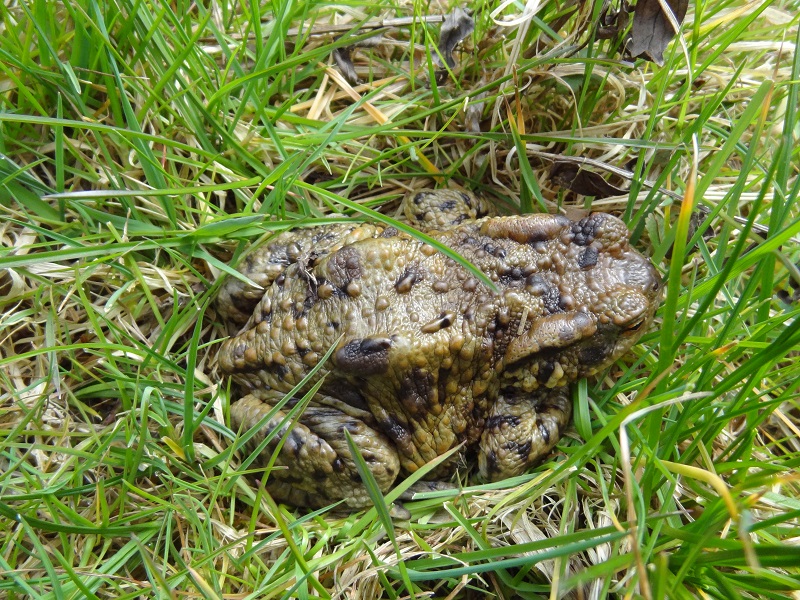 Other females had already found a fitting male, like this happy couple shows: 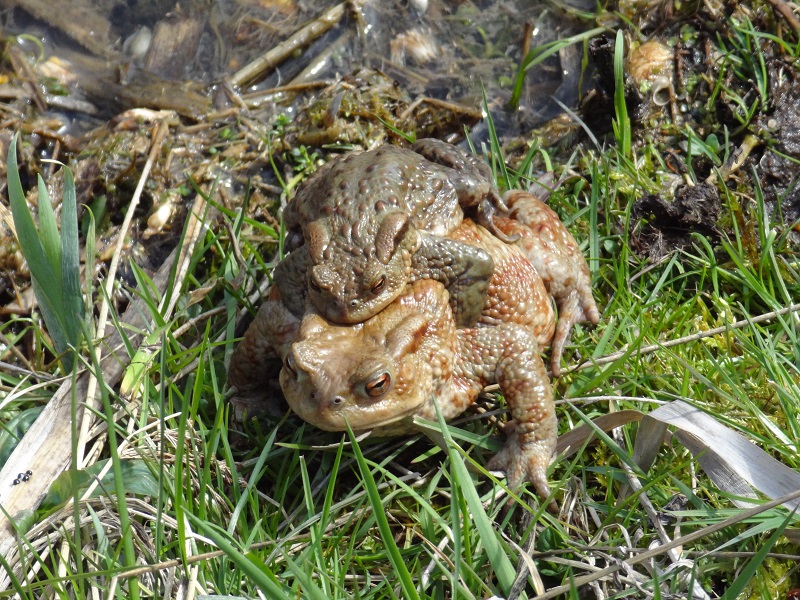 This photo shows also quite well the strong sexual dimorphism: 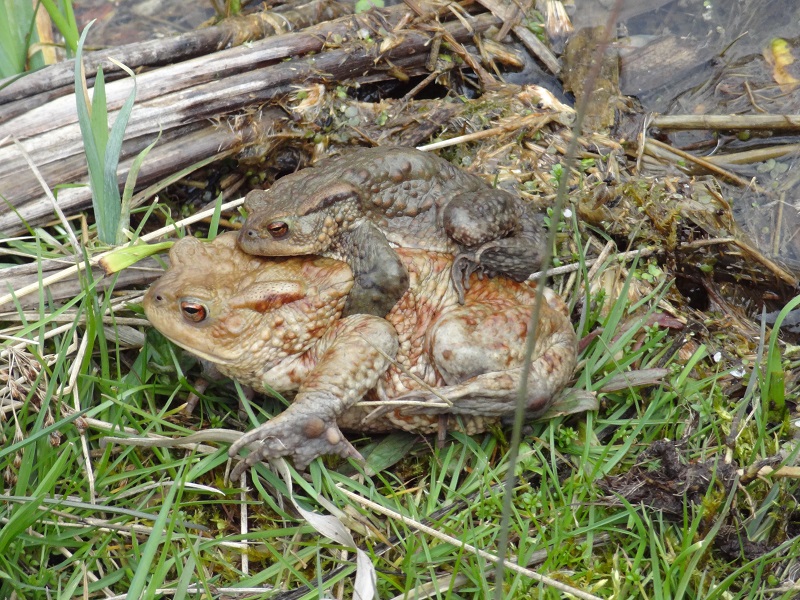 It also looks really strange when the females and males are walking together in this posture. 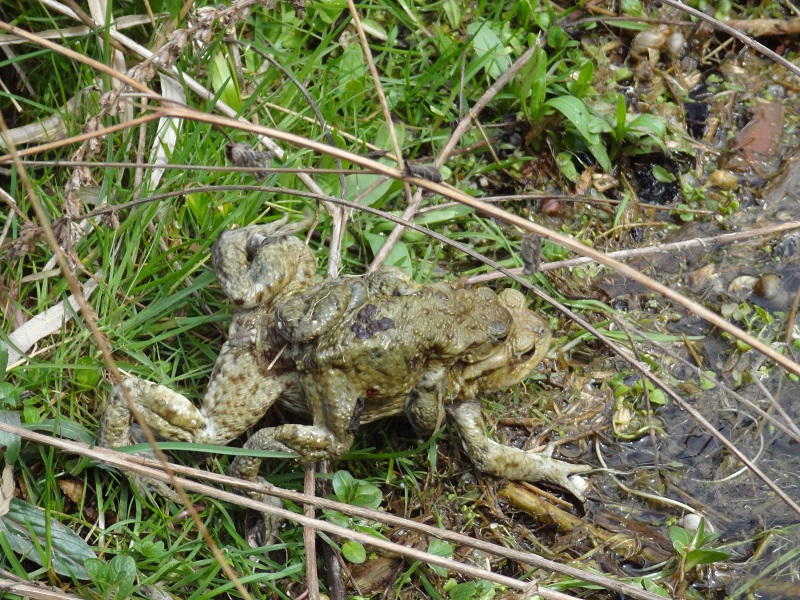 Other pairs were already together in the water. 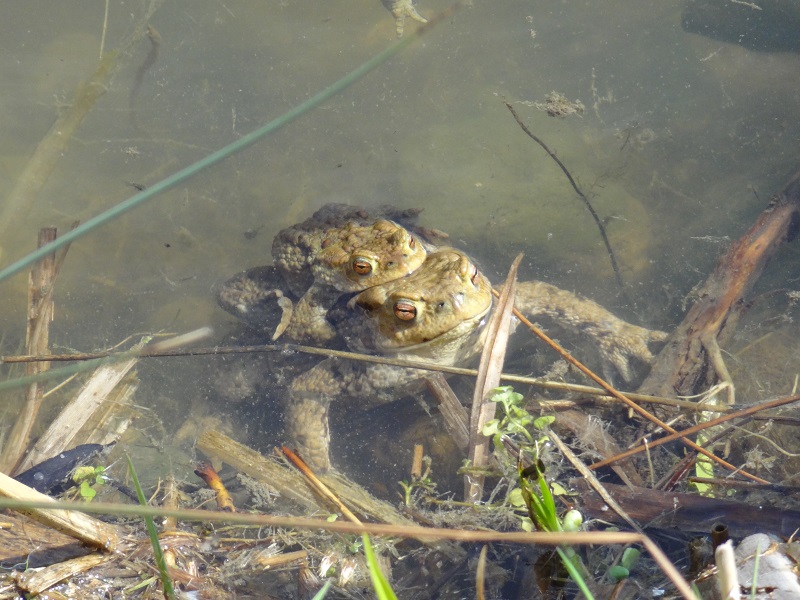 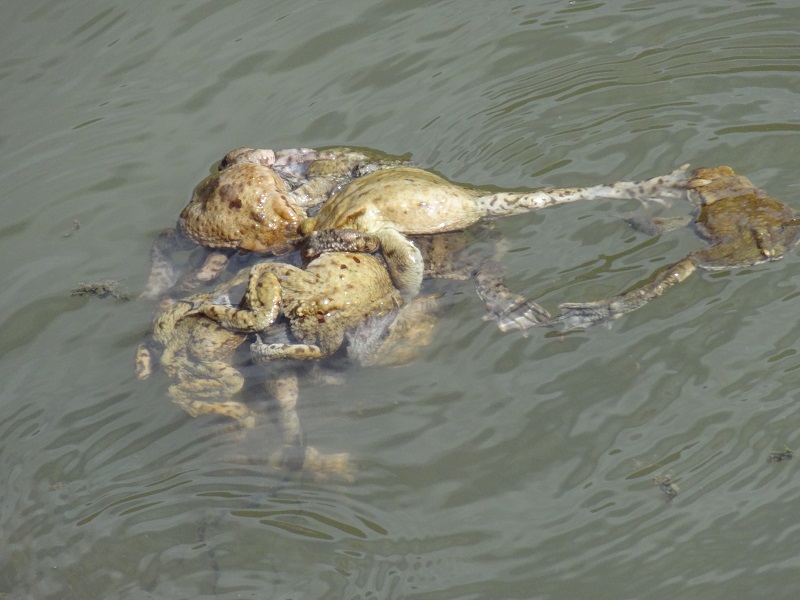 The females in those balls were no more visible, and it can happen on occasion that they drown under such masses of wannabe-lovers. 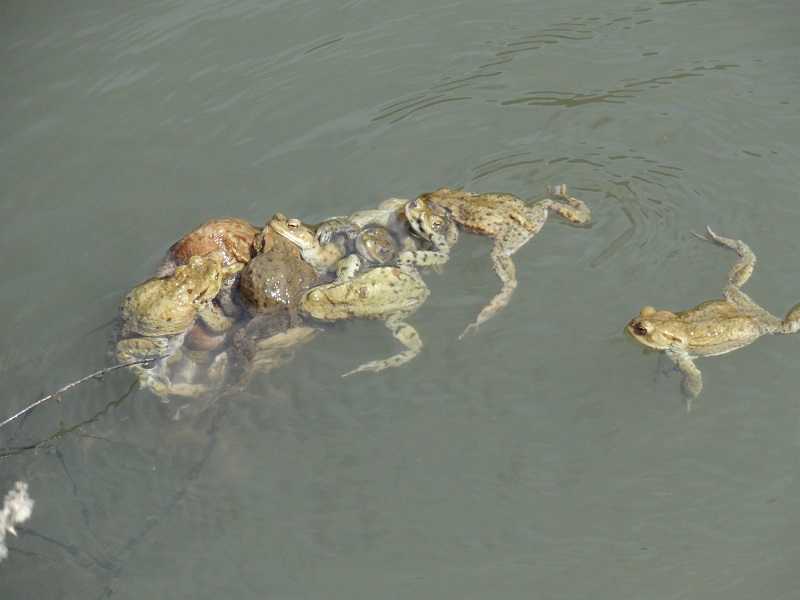 There is even a case reported in which an adult male common moorhen (Gallinula chloropus) nearly drowned because several male toads clinged on its head and neck. 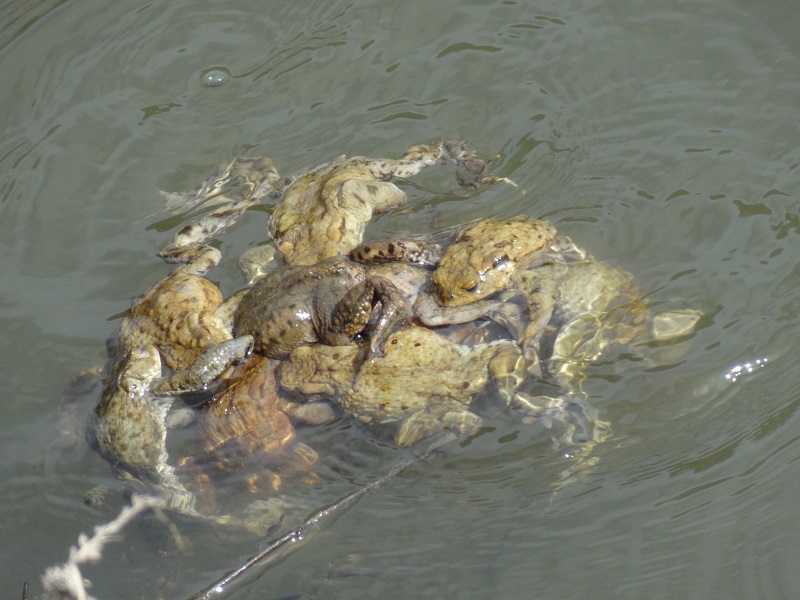 Another photo showing the large numbers of male toads in some areas of the pond. 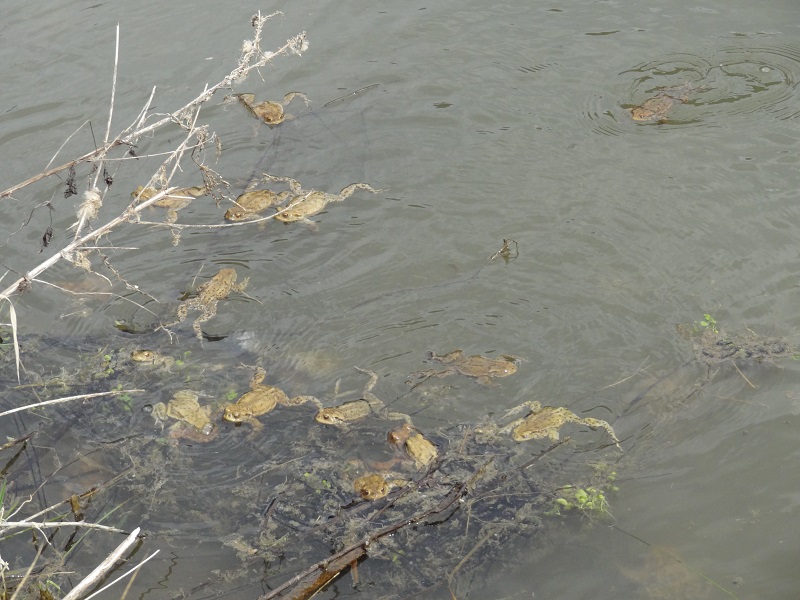 This obviously quite frustrated male continuously tried to copulate with a clump of moor frog (Rana arvalis) spawn. 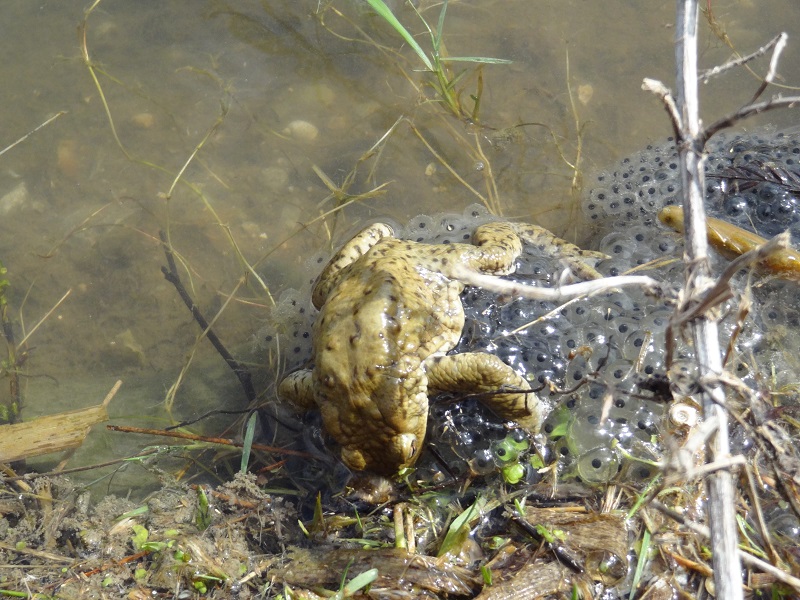 I could also observe a toad male which tried to jump on a moor frog, but apparantly quickly realized his error. You can also see a lot of egg strings around the toad and the two moor frogs. 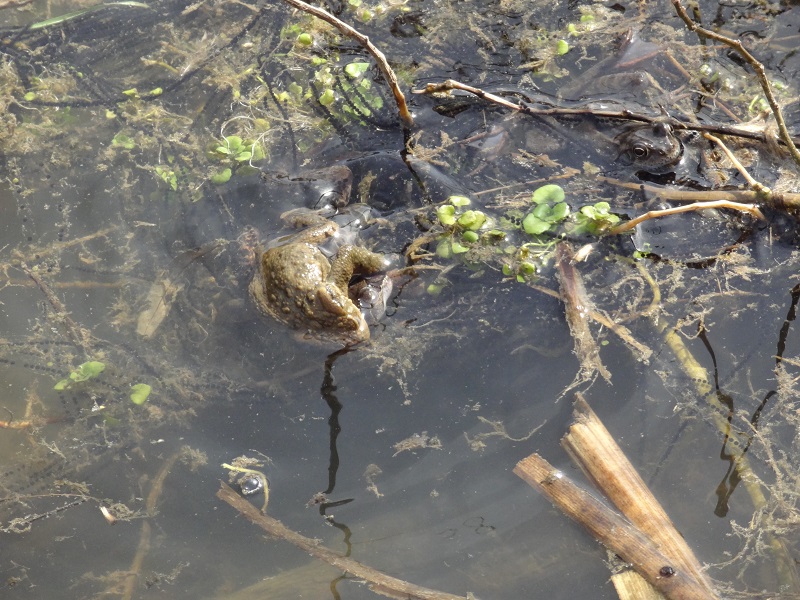 Another opportunistic toad male jumped out of the water up to me and chased me for several metres. That´s really a very weird feeling if a tiny toads is chasing you. Somewhat later another toad also suddenly chased me, or perhaps more probably, my shoes, which must have appeared to him like a potential female toad. 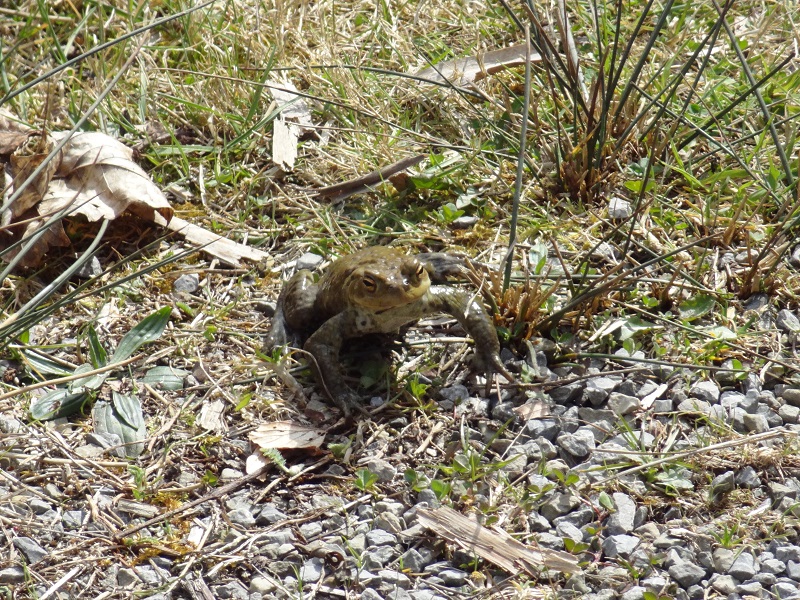 Here is a photo of the pond, which is located in a small park surrounded by woods. 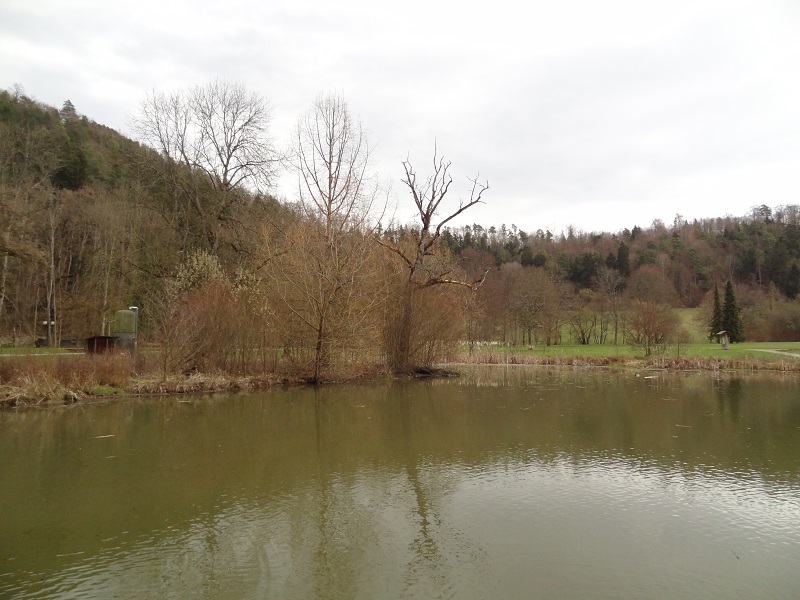 Meanwhile I have already seen the first tadpoles, and within a short time, the whole pond will be full of them.