In terms of zoological diversity, the Baltic Sea is probably the most boring sea of the world. It has the lowest salinity of all seas and it is only connected with one other sea, the North Sea. As a result of this it has only a very low number of native species, and those are also not particularly spectacular compared with those of the North Sea or the northern Atlantic.

What’s especially noteworthy is the nearly total absence of any bigger animals there. The largest marine mammals which are really native there are grey seals, harbor seals and harbor porpoises. The grey seal and thr harbor seal were already nearly fully extinct in the late 20th century and today there are only a few hundred specimens left. The harbor porpoise is also extremely rare and among the smallest cetaceans of the world. So even the mammalian marine megafauna is not exactly impressive to say it at least. As a result of the low salinity no sharks are native in the waters of the Baltic Sea. The biggest commonly occuring fish you can hope to see are only Atlantic salmons, sea trouts and cods. All of them rarely grow bigger than a meter as even the cods of the Baltic Sea stay much smaller than their cousins in the Atlantic Ocean and North Sea. Of course there are occasionally cases of vagrant specimens of bigger fish which usually don’t occur there, or even out-of-place cetaceans like rorquals or sperm whales. But this are rare exceptions and they could not even survive for a long time in the Baltic Sea, as they could not find suitable prey in this shallow sea. As you see, aquatic megafauna is next to absent there.

This makes it even more surprising that there actually were gigantic fishes in the Baltic Sea until just a few decades ago. Giant blue fin tunas were common denizens of the Baltic Sea. This predators are among the largest teleost fishes of the world, with record specimens of more than 650 kg and lengths of more than 3,5 m. The ones caught in the Baltic Sea were not that gigantic, but still dwarfed every other fish around, since the European sturgeon which also once populated this waters has become practically extinct in the early 20th century. Some of the tunas living off Denmark grew to massive sizes, like this one which was caught around 1880 whose skeleton is now on display at the zoological museum of Copenhagen. 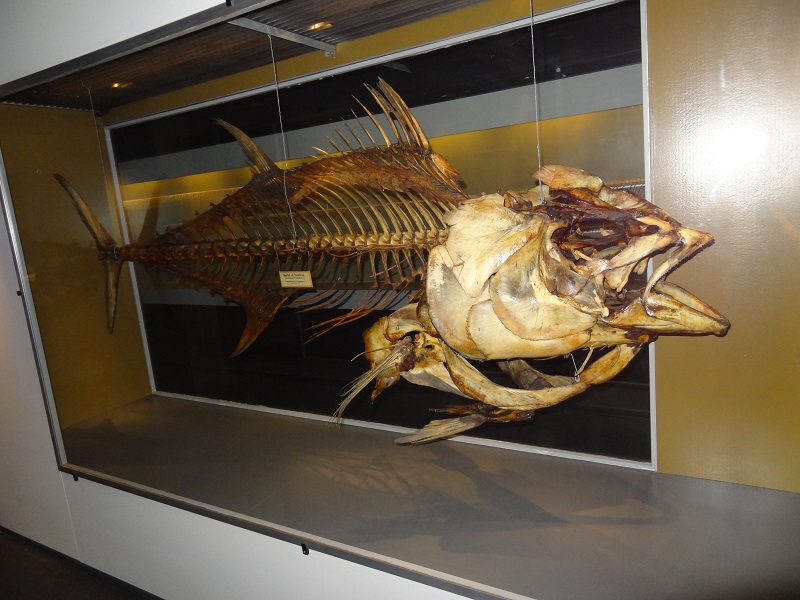 Skeleton of Atlantic bluefin tuna from around 1880, Zoological Museum Copenhagen

Sometimes tunas of more than 300 kg were caught, and the record was even a massive specimen of 372 kg.

Here is skull of a big tuna caught in 1962 at Howachter Buch, Germany, now on exhibit at the zoological museum of Kiel. 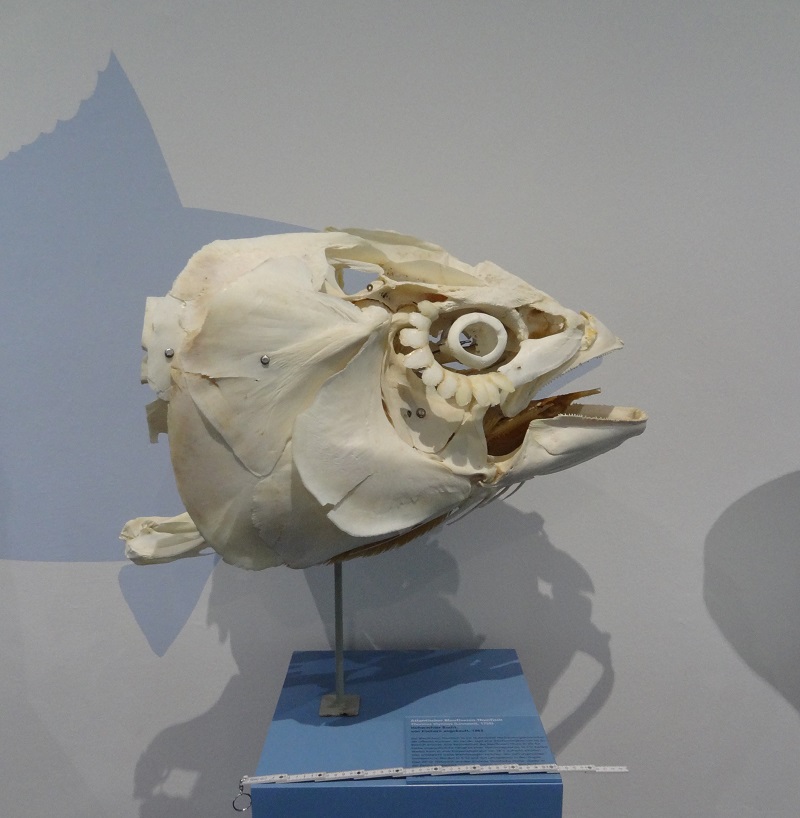 I added a pocket rule of 50 cm to give you a better idea of the size. Here is another photo which shows the skull with the reconstructed outline of the whole fish. 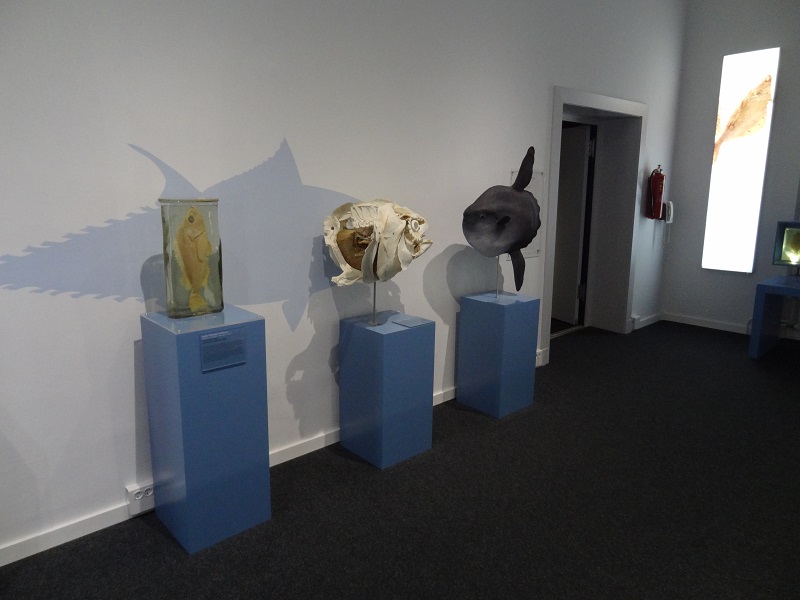 Bluefin tunas were regularly caught by fishermen in Danish and even German waters. They were so frequently caught that a factory for canned tuna was built in Skagen in 1929. Sport fishermen came even from Great Britain to Denmark for big game fishing. But the whole business ended in the 1960ies when the tunas disappeared from the Baltic sea. The reason was overfishing, not only in Denmark but also in other parts of the world like in the spawning grounds in the Mediterranean Sea and the Atlantic ocean where the bluefin tuna has its nursery ground.

Today there is not much that reminds on this giants anymore. At Odden Havn, a small fishing port at the north coast of Sjaelland, you can still find old photos from the time of commercial tuna fishing, which seem nearly surreal today. Here is a historic photo of fishermen with tunas from Odden Havn, Denmark. 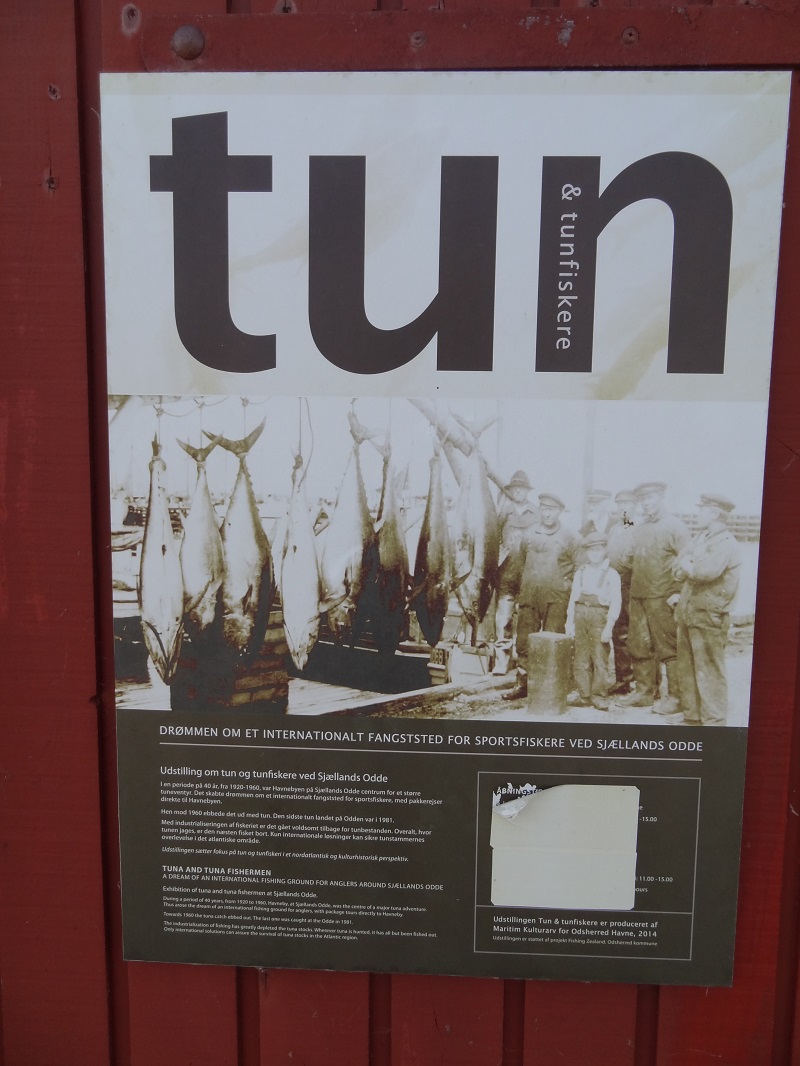 This port was one of the former centers of tuna angling and fishing. Even today there is still a tavern name tuna. Many years ago, there was still a large taxidermy head and caudal fin of a trophy tuna at the „Tunen“-restaurant of Odden Havn. I think it is now on exhibit at the tuna fishing museum of Odden Havn, which opened just a few years ago. Sadly it was every time closed when I was there, even at days when it should have been open, so I don’t have any photos from the interior. 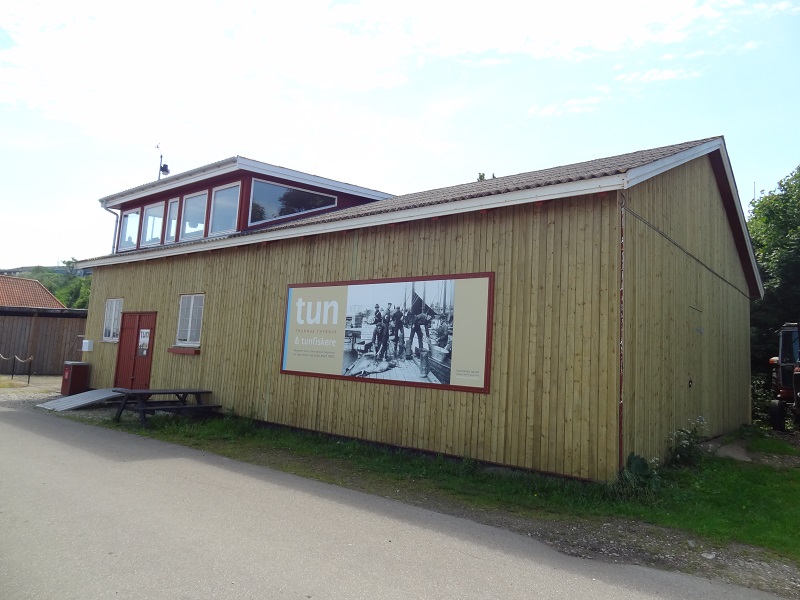 The old trophies, skeletal remains and black and white photos seems to be the last remnants of a bygone era. But in recent years, the first blue fin tunas came back to the Baltic Sea. In September 2017 a swarm of tunas wad sighted off and subsequently a project was started to tag some of them. One of them was caught with hook and line, a huge specimen of 2,51 m length and an estimated weight of 285 kg. This was the largest fish which had been caught in this waters since half a century. After it was tagged, it was released again. Of course the tunas are now strictly prohibited there and catching them is only allowed for scientific research. 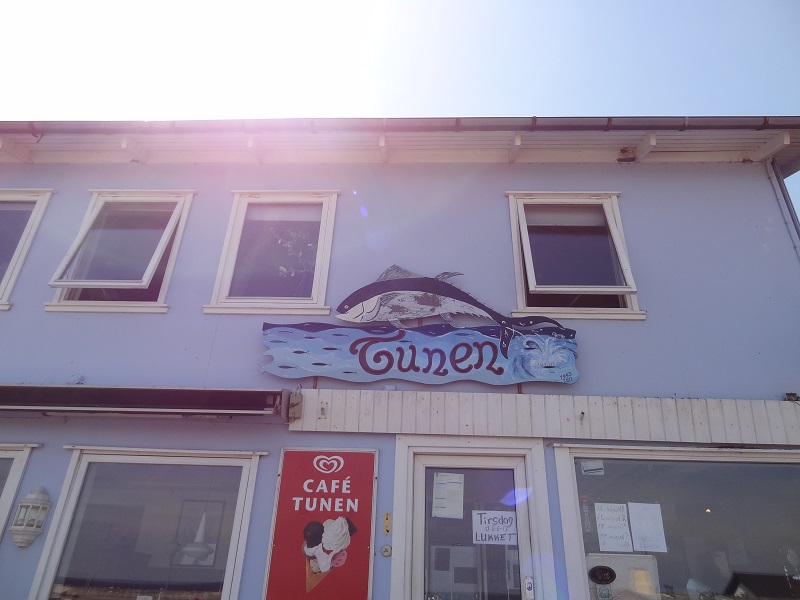 The „Tunen“ restaurant at Odden Havn.

It will likely take many decades until tunas are again regularly found in the Baltic Sea, but their eventual reappearance seems to be a good start at least. But it is also a reminder that tunas are not just big tasty fish but endangered marine wildlife which are already exterminated in much if their original range. They are marine megafauna like cetaceans, seals or sharks, but they still don’t get the same sympathies. Even people who are outraged about the slaughter of whales for „scientific research“ or the killing of sharks for their tasteless fins will often still happily and regularly buy and consume tuna. I strictly reduced my tuna consumption already many years ago and it would really help if more people would appreciate those fish not just for their culinary qualities but see them instead as endangered wildlife and giant marine predators which are close to the top of the food chain.

To conclude, I really have to apologize for my seemingly harsh words towards the Baltic Sea at the beginning of the blog. I absolutely love the Baltic Sea, it is by far the sea with which I am most familiar with, and I it has its very own loveliness and beauty. 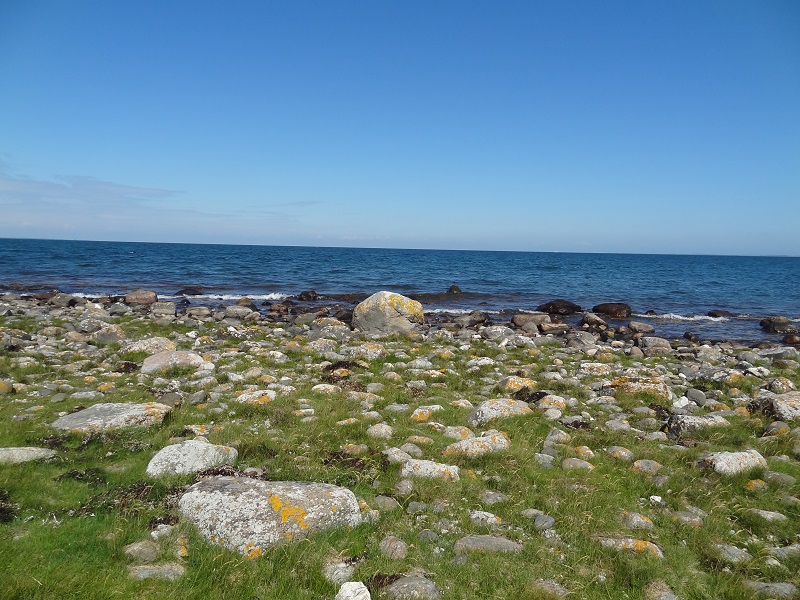 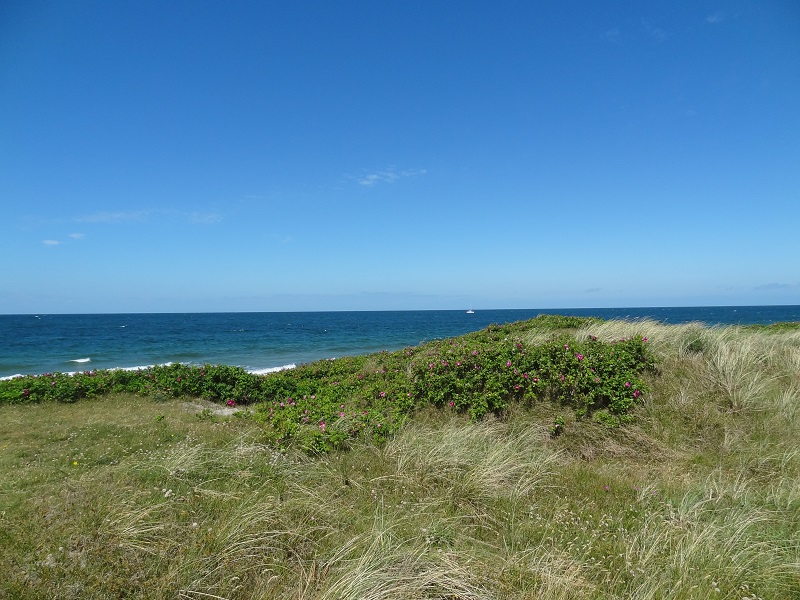 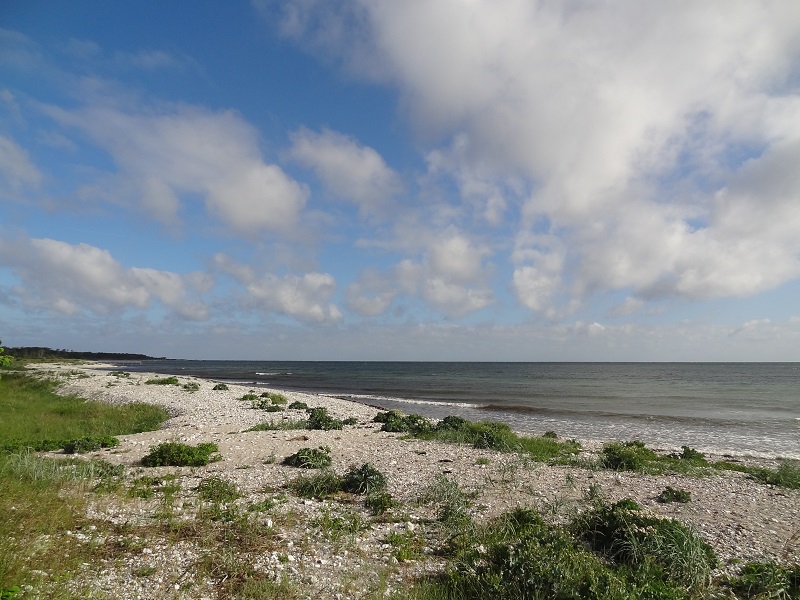