Last year I was involved into a fantastic project, the production of the wildlife documentary „Into the Forest: Reptiles & Amphibians“ by my good friend Bryan Maltais.He made already several other shorter documentaries, including the award-winning production „Metamorphosis“ about the amphibian life in a wetland in Colorado. But this was by far his biggest project. I want to write here about the filming and the background of „Into the Forest“, which is now also available on Amazon Prime, both in English and German. 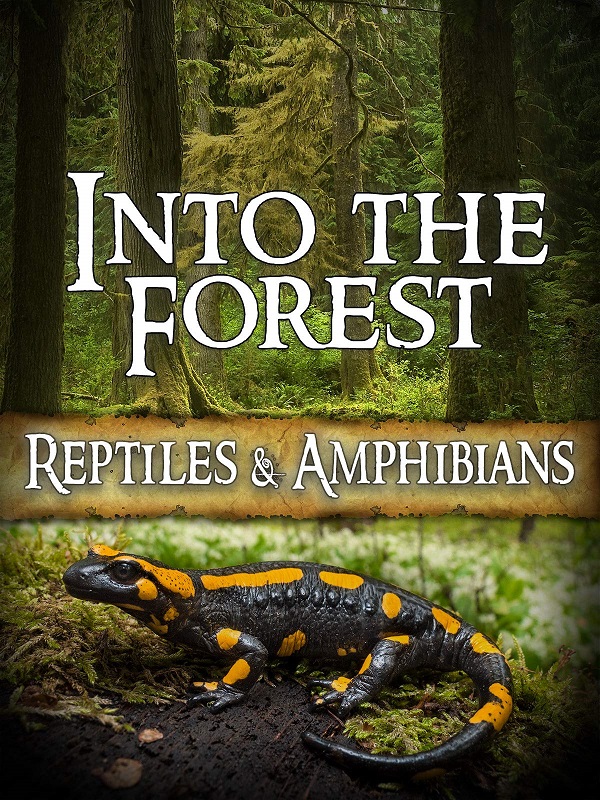 German version (this link only works in DE)

You can see the trailere here:

Bryan spent his early youth with his German mother and American father in Germany but later grew up in the U.S. Over the decades he regularly came back to visit his second home and the German part of his family. During those vacations he regularly visited a forest near Denkendorf, a village not far away from Stuttgart, in the southwest of Germany. It was this forest where he came for the first time into contact with the European herpetofauna and other native animals. He later studied wildlife biology and developed a particular interest into reptiles and amphibians. Over the years Bryan became a professional nature and landscape photographer and produced several documentaries, mainly about reptiles and amphibians. 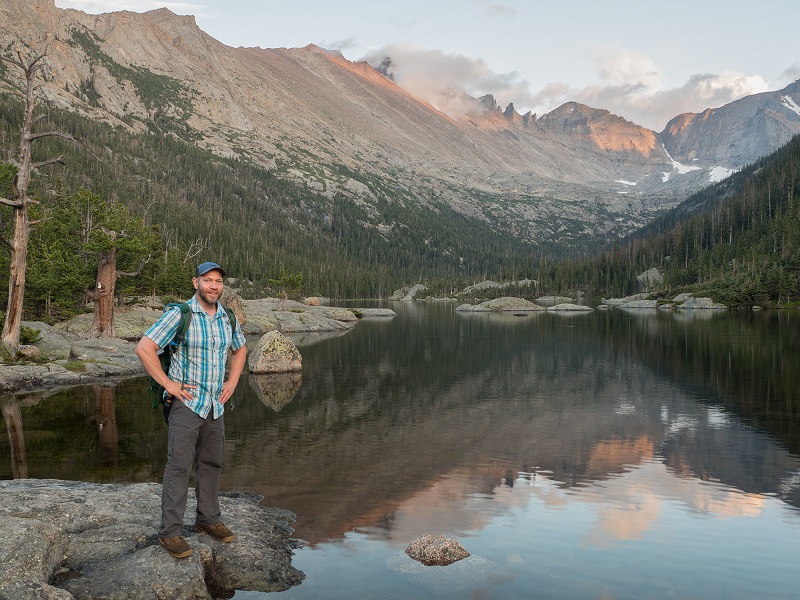 We met for the first time in 2014 after I discovered his documentaries on YouTube and realized that Denkendorf is in fact comparably close to my own place of residence. Over the years we met for several more times for herping tours and I introduced Bryan to various other interesting locations like the habitat of my local green lizard (Lacerta viridis) population or the Black Forest with its melanistic European adders (Vipera berus). 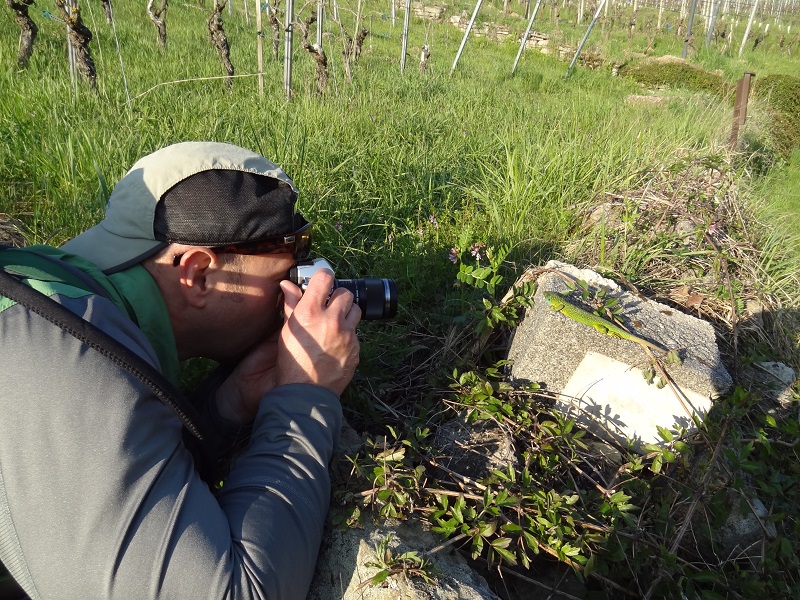 But „Into the Forest“ became a much bigger and much more extensive project than just a few tours to the woods. Bryan spent three whole months in Germany to document the rise of nature from the last snow of march to the early summer in june. He was filming for nearly every single day and sometimes even during night, and when he wasn’t filming he worked on editing and cutting the videos.

To produce a high quality documentary he used a 4k camera so you can also enjoy it on a big screen in TV quality. He made slow motion and fast motion videos, underwater-and night vision footage and made also some amazing landscape videos with a drone (which had tragically a fatal accident, luckily all the important drone footage was already filmed at this time).

View over the Black Forest. Screenshot from „Into the Forest“ 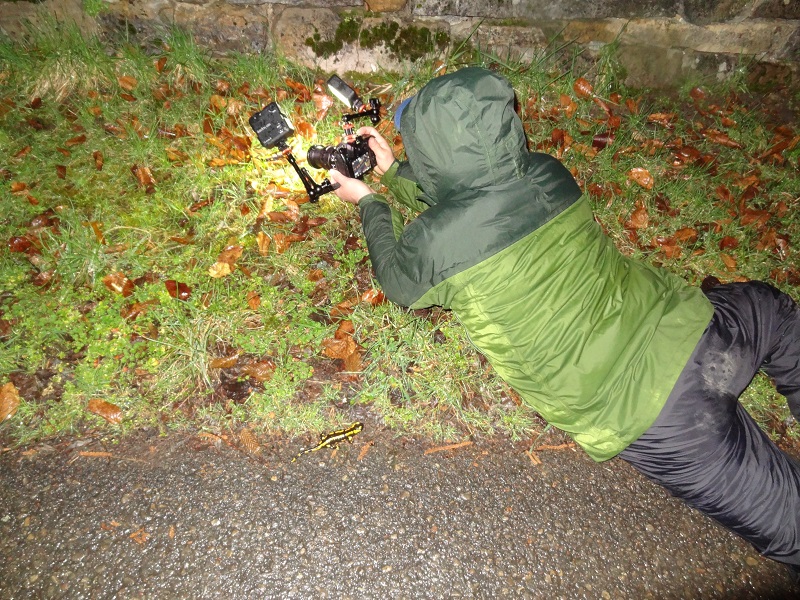 The fire salamander also plays a key role in the documentary, but not just for its charming appearance but also to raise awareness about the dangers of the chytrid fungus Bsal which entered the European continent from Asia over the amphibian pet trade. Bsal already eradicated whole fire salamander populations in Belgium and the Netherlands, and has already reached northern Germany. Sadly, it is likely to continue spreading even further through Europe. 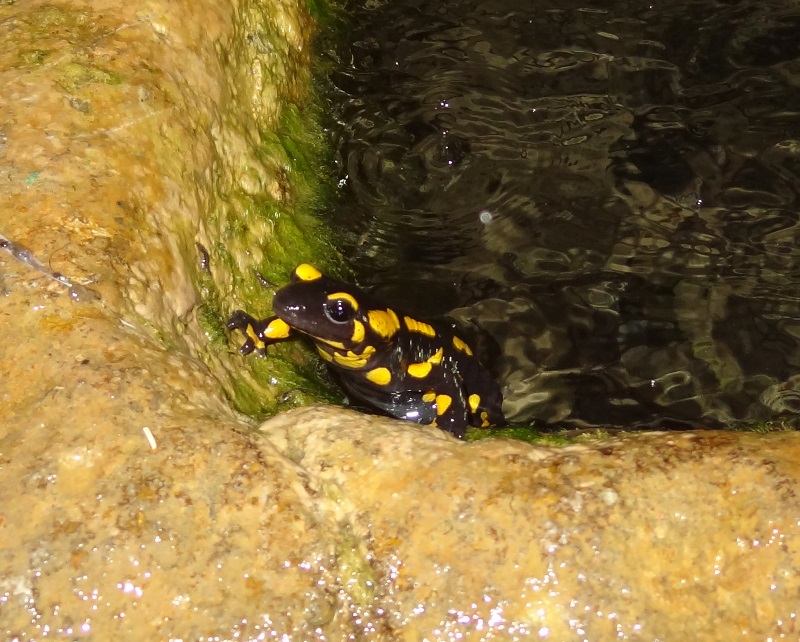 Another nightly tour brought us to a local population of European tree frogs (Hyla arborea). The loudness of their croaking was just incredible. This was for me also the very first time to see European tree frogs, as this species has sadly become extremely rare, mainly as a result of a lack of fitting habitats and small periodically draining ponds where they can successfully spawn. I was also quite surprised to learn about this population which is also quite closely located to some of the other areas where Bryan filmed. 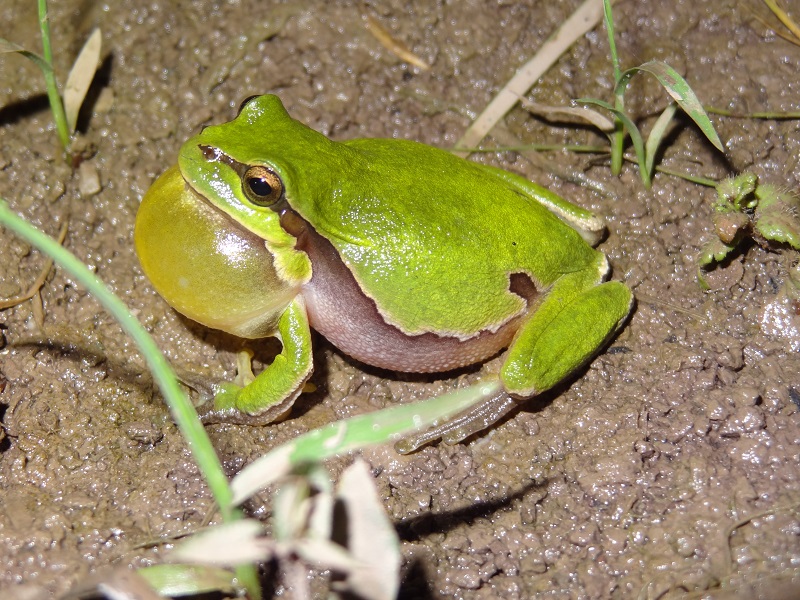 Of course the wonderfully exotic-looking (and in this case allochthonous) green lizards (Lacerta bilineata – or is it viridis? Things are complex here) of the local population here around were included as well. Bryan could even film a mated pair, and the drone footage provided some great views of their habitats within the centuries old vineyards. 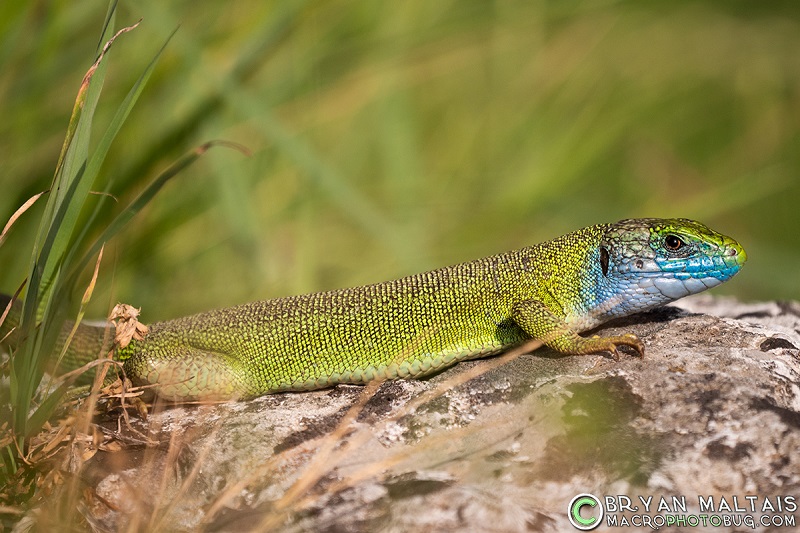 Another reptile we hoped to find remained however elusive. The year before we made a trip to the Black Forest (which is also only about an hour to drive from here) and were able to find two specimens of melanistic European adders. 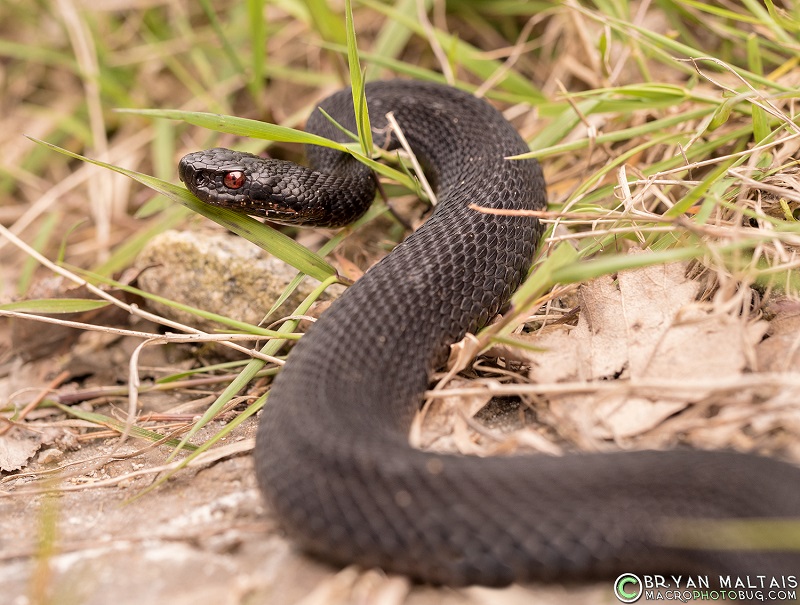 Melanistic form of the European adder, the „hell adder“

But this year we had sadly lesser luck. During our first trip to the Schliffkopf, one of the highest elevations of the Black Forest, it was despite the early time of spring extremely hot, well over 25 Celsius. On some places there was still half a meter of snow, but the heat of the sun was just too much for the adders. 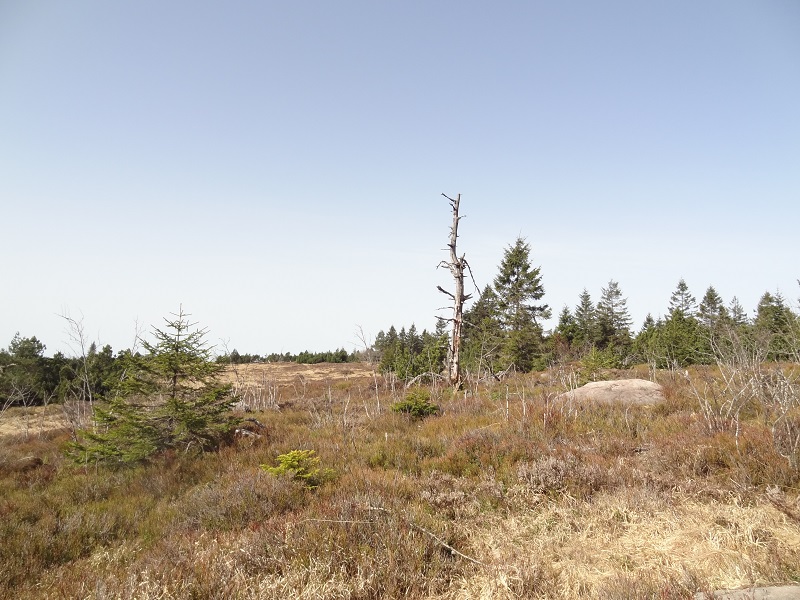 Not a tundra area at Scandinavia but an upland plain at the Schliffkopf. Photo by Markus Bühler

At least we could observe some particularly nicely colored European grass frogs (Rana temporaria) in the act of mating, and this sequence was also included into the final documentary. 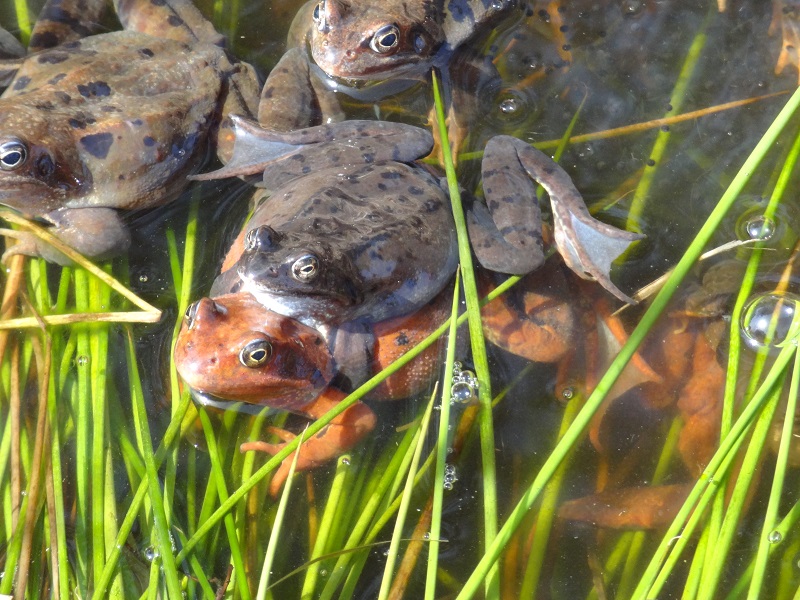 We made later two further trips, but every time the weather conditions were against us. At the second tour to the Schliffkopf mountain it was quite the opposite of the last time, it was very cold with a lot of wind and fog, but next to no sunshine. Again pretty bad conditions for adders. However the fog over the forest provided some spectacular landscape shots. 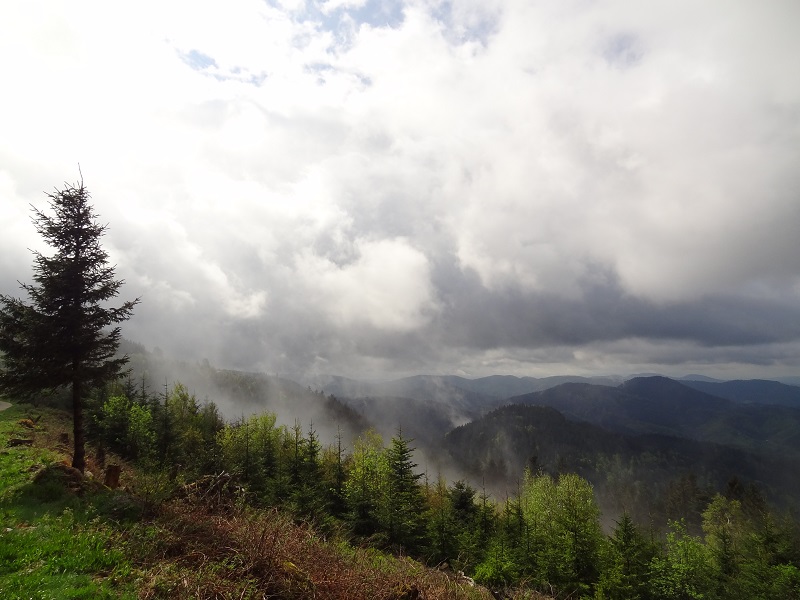 Fog and clouds over the Black Forest. Photo by Markus Bühler

The view from the slopes around the Schliffkopf is really great, you can even see the Alsace behind the river Rhine. 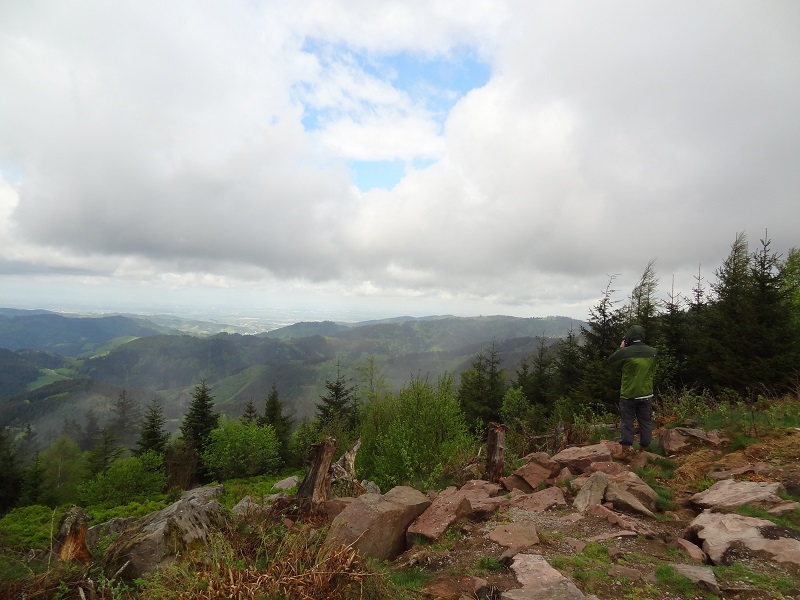 Our last tour to the Black Forest lead us to Kaltenbronn, an area with several bogs where we found the two adders the year before. Sadly all we found that time was a single freshly road-killed adder. 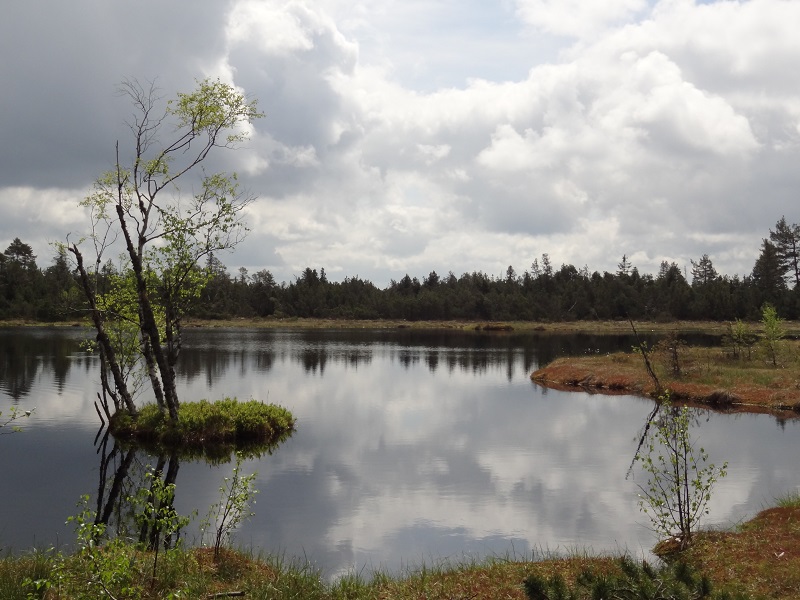 A photo of me from our more successful adder-tour in 2017:

One highlight was also a herping excursion to Croatia. There would be so much to say about the many things which we have seen there, but this would be way too much here. We made a tour from the island of Krk to to the very southwest of the Croatian mainland, down over Istria to the island of Cres and again back to Krk. We saw various interesting reptiles, birds and a lot of really unusual invertebrates and spectacular landscapes. We didn’t find as many reptile species as we hoped, especially snakes and scheltopusiks (Pseudopus apodus) proved to be quite elusive and hard to find. I spied only a few of scheltopusiks at the first day at Krk, but it was not possible to take any photos. One species for which we had especially big hopes to see it was the horned adder (Vipera ammodytes), one of the most venomous snakes of the European continent. 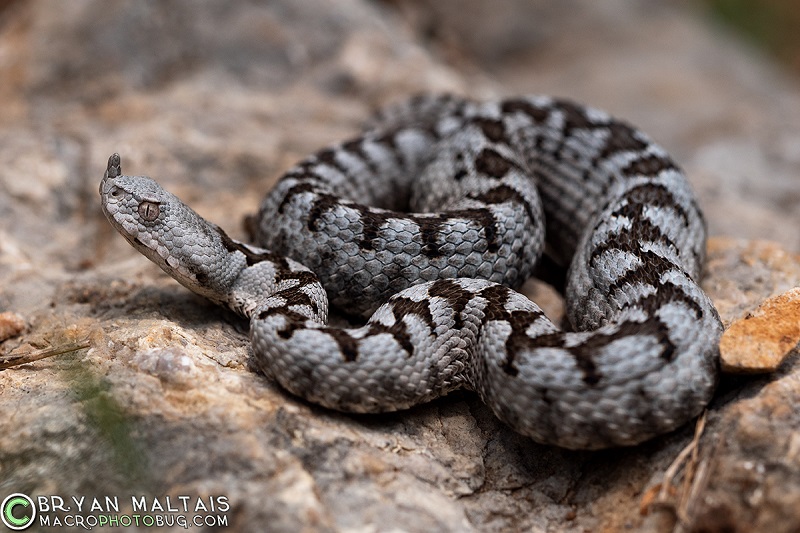 It was still a lot if luck involved, but during our systematic search I could detect a tiny horned adder between some stones. This enigmatic little snake was surely one if our greatest finds during the excursion. 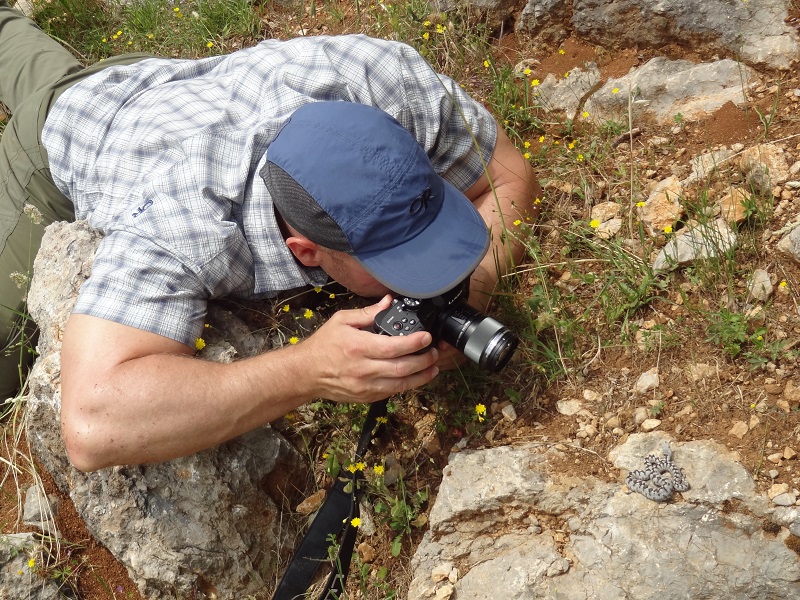 Bryan and the horned adder, island of Krk, Croatia.

To have at least a more southern cousin of the European adder on screen, it was also included within a short segment about our excursion. There would be still so much more to say, but I will make a break here, in hope to write anytime a future blogspot about our tour to Croatia. You can see some more photos on Bryan’s website.

A considerable part of the documentary was filmed in the Schönbuch forest, a large forest area near Tübingen. The deep and wide-ranging woods provided various interesting locations for filming, from game enclosures with red deers and wild boars to large ponds full of tadpoles. Germany is quite densely populated and even most of the nature reserves are in one way or another altered by human activities. In many cases this already happened centuries ago, so the landmarks of human activities are often deeply interwoven within the surrounding landscape. 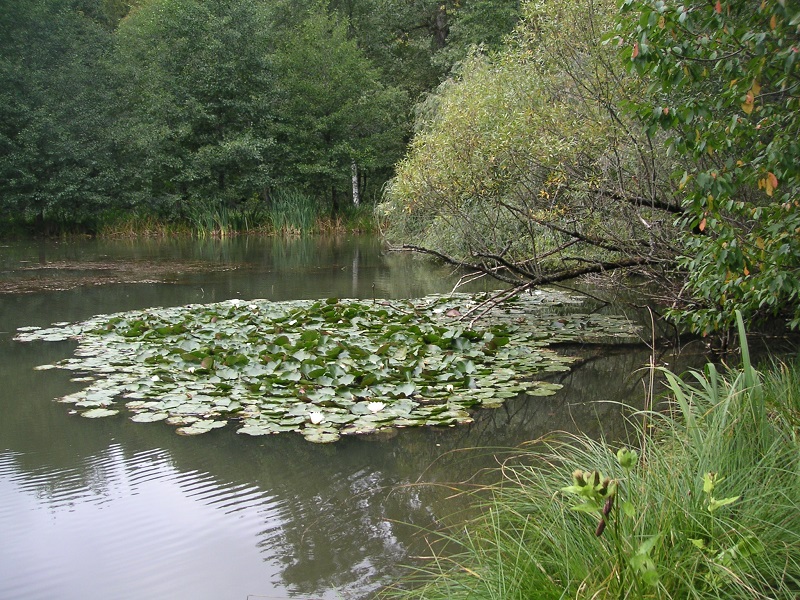 One of the big ponds of the Schönbuch forest. Photo by Markus Bühler

One especially nice remnant of human culture was also included, the old monastery of Bebenhausen which is located just in front of the Schönbuch forest. Surrounded by centuries old wooden framework houses, its gothic architecture, ancient walls and old towers made it also a perfect location for drone footage to show the full range of the complex.The monastery was founded in 1190 and after the reformation it was among others used as a hunting lodge and the late residence of the last king of Baden-Württemberg in the early 20th century. 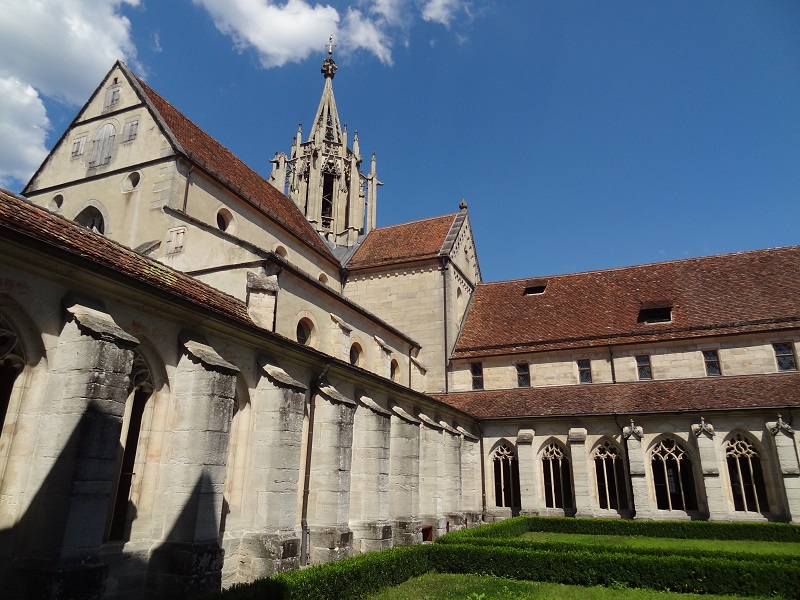 The old monastery of Bebenhausen. Photo by Markus Bühler

We visited also the Alter Aichwald („old oak forest“) near Denkendorf where Bryan made much of the filming of fire salamanders and other featured amphibians. We were there already years ago on our first fire salamander tour. 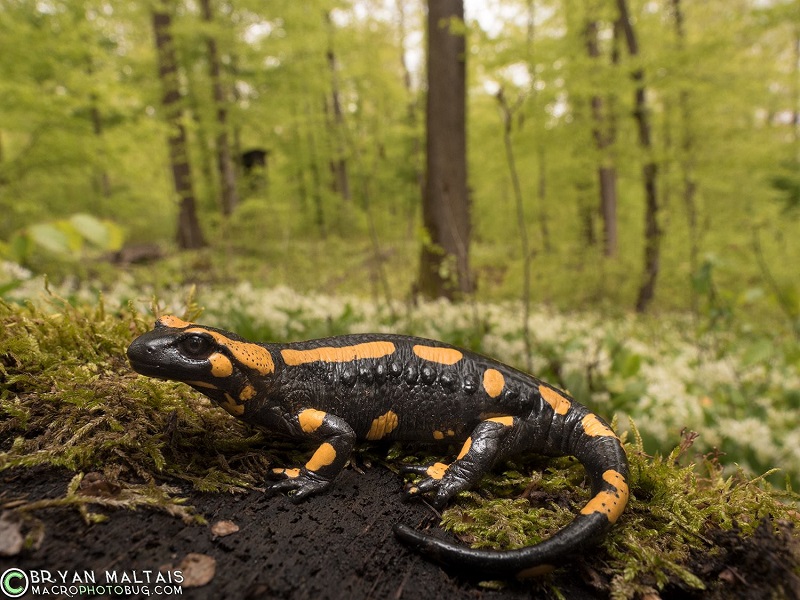 Bryan showed me the big badger den which he discovered and where he could make some great footage with a game camera.
I know many of those locations for nearly my whole life and have countless wonderful memories about them. To see them now in high quality documentary feels nearly somewhat surreal, especially as I was on site during many of filming sequences. I learned a lot of new things and made many new experiences, and it makes me really proud that I could contribute a little bit to this wonderful documentary. Bryan did really an amazing job to produce the whole documentary himself. He did all the cutting of the scenes, the selection and arrangement of the background music, the script (which I translated and adapted for the German version, entitled “Der magische Wald: Reptilien und Amphibien) and the digital enhancement of certain scenes. Normally such documentaries are made by whole production teams or even specialized companies. 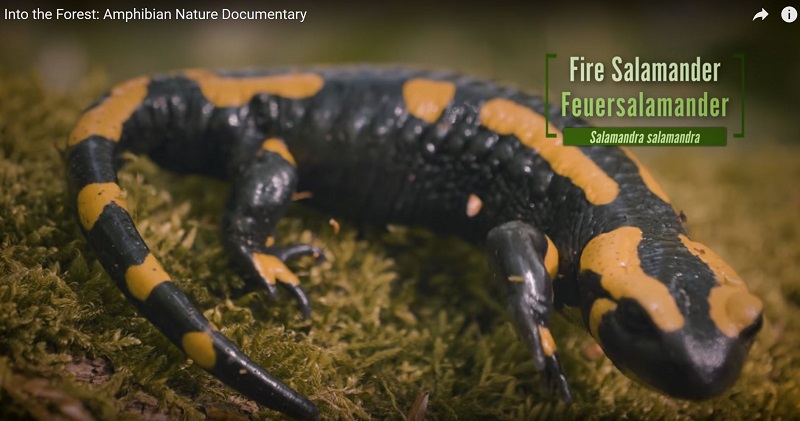 Screenshot from „Into the Forest“

„Into the Forest“ became a really wonderful documentary especially as it focuses on animals which get despite their fascinating lives usually only little media coverage. I think it will be also quite interesting to see for everyone interested in animals, no matter if you’re European and familiar with some of the featured animals or if you are living anywhere else on the world. I could imagine that for non-European watchers it could be especially interesting to learn about some of the enigmatic animals which still dwell in such a non-exotic area, and also about the surrounding landscapes and history of Southern Germany.
You can read more about the documentary at the official website Into the Forest.
Bryan has also many of his nature and animal photos on MacroPhotoBug, wildernessshots and his instagram and Facebook-page. His documentaries are available on his YouTube channel.

Many thanks also to all who wrote suggestions, ideas and constructive criticism during the editing of “Into the forest”.