A new model of Meyerasaurus – or how to bodypaint a plesiosaur

Today I wanted to show you some photos of a life-sized model of Meyerasaurus, a rhomaleosaurid from the Toracian stage of the early Jurassic, whose fossils were found at Holzmaden. The model was made by my friends from kamyk.pl, a Polish company which specialized in the creation of zoological and paleontological models for museums. I had already the chance to take a close look at some of their wonderful models at the last two fossils fairs at Leinfelden-Echterdingen, the largest anual fossil fair of Europe. One of their latest models – the Meyerasaurus – was made for the Natural History Museum at Lodz, Poland.

Here is another photo of the model: 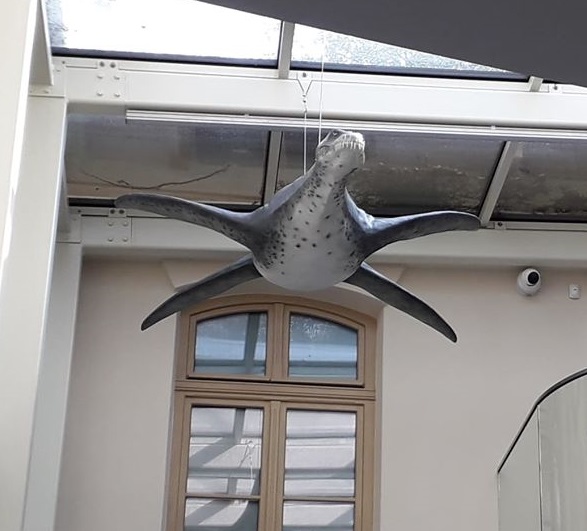 When the model was already finished and awaiting its paintjob, Piotr Menducki of kamyk.pl asked me for some proposals about possible colour schemes and pattern. So I reflected about possible and probable colours and patterns which could fit with this model. I wanted to avoid too much influence from other models and life reconstructions of plesiosaurs. The reconstructions from the BBC-series „Walking with Dinosaurs“(1999) and „Sea Monsters“ (2003) for example have been highly influential, and even today you can see a whole lot of reconstructions which are clearly based on their designs. So instead of looking at other models and paleoart, I focused on modern marine animals to get some ideas. 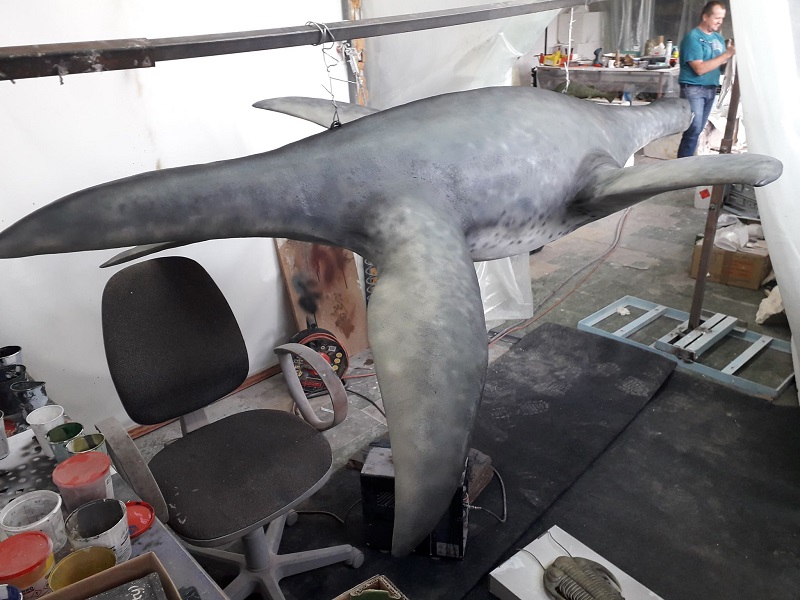 There is sometimes a certain tendecy to depict mesozoic marine reptiles with quite fancy colours and patterns similar to terrestrial reptiles. But if you look at modern marine animals, it´s quite noticeable that their main range of colours and patterns is still comparably overseeable. Small and medium sized animals have much more often striking patterns and flashy colours, whereas bigger animals tend to have more uniformous colours and lesser or even absent patterns. Of course this is no rule, more some sort of tendency, with a whole lot of exceptions (like whale sharks or oarfish). But you can see that tendency even within the ontogeny of many animals, particularly in fishes and reptiles. Young komodo dragons, nile crocodiles and tiger sharks – to name just some iconic and well-known species – have very prominent patterns during their youth, which fade more and more when they grow bigger, until they have nearly fully vanished in big old specimens.

So I looked at various sharks, big marine fish, cetaceans, seals and marine reptiles to find certain patterns which we can find in all of those lineages. I started with the leatherback turtle, one of the most amazing reptiles of our time, and in many respects the closest living thing to a plesiosaur. Adult leatherback turtles are usually of a dark mottled grey main colour, with small brighter spots and a brighter area in the area of their throats. It´s notable that younger leatherbacks have also often much more contrast-rich skin with much bigger white skin areas than adult specimens. 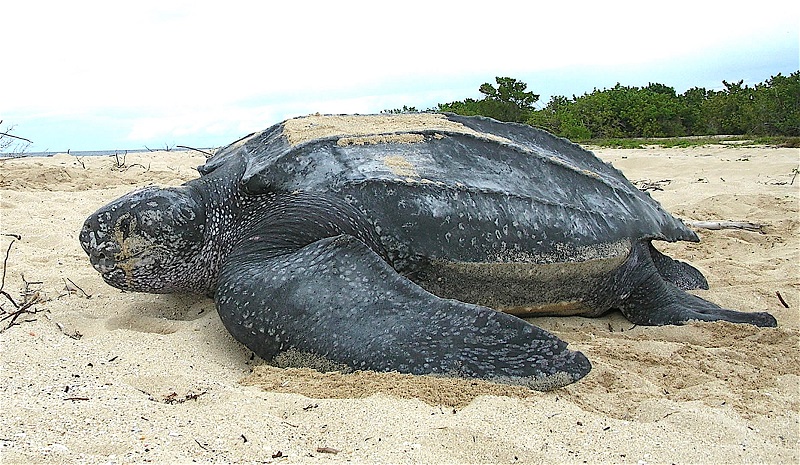 This combination of different shades of grey, combined with white and black patterns, is very common among a whole lot of highly different marine animals, from mammals, to birds, certain reptiles, sharks, rays and teleost fishes. So it seems really not too far-stretched to assume that many mesozoic marine reptiles were likely somewhere within this range as well. Given the enormous number of known plesiosaurs (plus countless still unknown species) which lived for an incredibly long time in the oceans of the world, we could probably bet that they had not only a lot of variation in colours and patterns, but also that at least some were really within the most common colour schemes of modern marine animals of comparable size.

The combination of mottled grey as a main colour, combined with brighter areas at the ventral parts of the body and some lighter or darker spots seemed to be a good and reasonable concept.

If you look at mammals, you can also find species which resemble the pattern and colours of the leatherback, for example the infamous leopard seal (Hydrurga leptonyx).

Another photo of a leapard seal, which shows the head in detail: 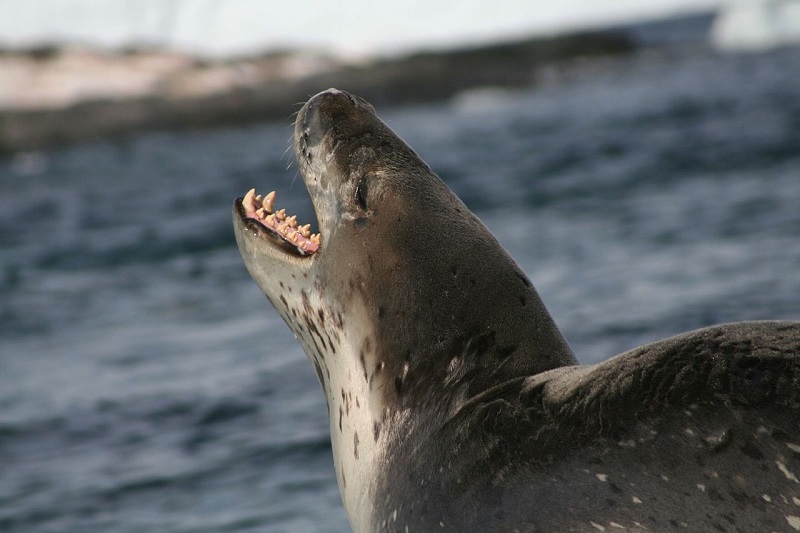 It´s really interesting how there are not only many different shades of grey, ranging from silvery-white to dark grey, but also bright and dark spots as well. Many other seals have very similar coats, for example harbour seals or grey seals, and to a lesser degree also mediterranean monk seals.

Among cetaceans, the Atlantic spotted dolphin (Stenella frontalis) fits also quite well herein, but there are also many other cetaceans with lesser pronounced spots which have a quite non-uniformous mottled grey skin. Another interesting, and rarely seen example would be subadult narwhales, which are still much darker than adults. It is also quite important to keep in mind that many cetaceans have a surprisingly high intraspecific variation of colours and patterns, depending on age and sex. 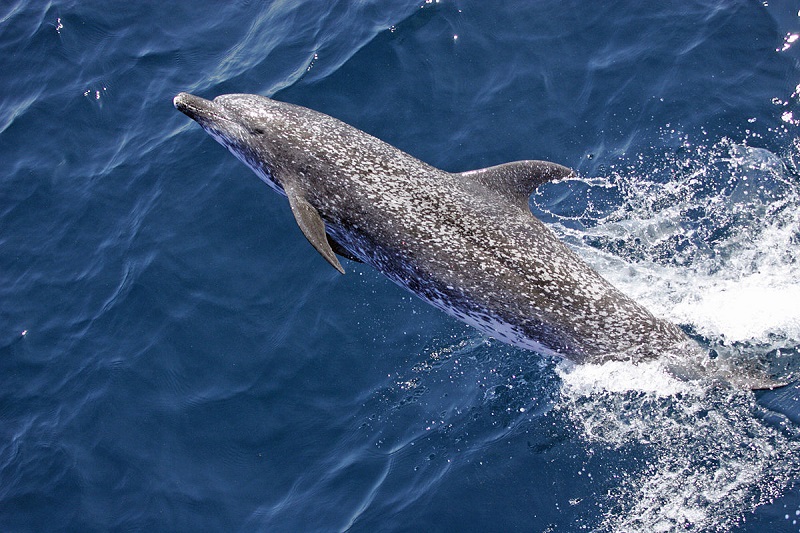 It is also quite important to keep in mind that the very common idea that aquatic animals show countershading with darker dorsal and lighter ventral areas is also not a universal rule, but also more a tendency. Many seals and cetaceans are for example nearly fully dark, like sea-lions or false killer whales, whereas some like the super-bizarre strap-toothed whale Mesopodon layardii show even some negative countershading whith large whiteish dorsal areas. In many cases you see also only small white ventral areas, for example around the mouth of throat, or sometimes also in the pelvic area, like in sperm whales or Southern right whales.

Here is also a photo of a salmon shark (Lamna ditropis), which I show here for obvious reasons: 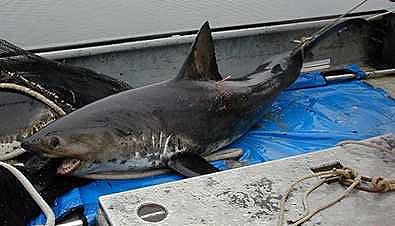 Admittedly, that´s not a very common pattern for pelagic sharks, which are in general without distinct spots, except for markings on the fin tips. That reminds me also on a story I experienced some years ago. I was at late evening in a rockabilly bar, when I accidentally heard a conversation of an older and already somewhat drunk punk with another guy. I have no idea what their conversational topic was, but one sentence sticked in my mind:

„The great white shark isn´t white at all, it looks more like an old filthy car.“

That´s really the coolest description of Carcharodon charcharias I´ve ever heard, and there is really something to it.

Another example of a cartilaginous fish with dark main greyish colour and bright spots, even one from tropical areas, the spotted eagle ray  (Aetobatus narinari): 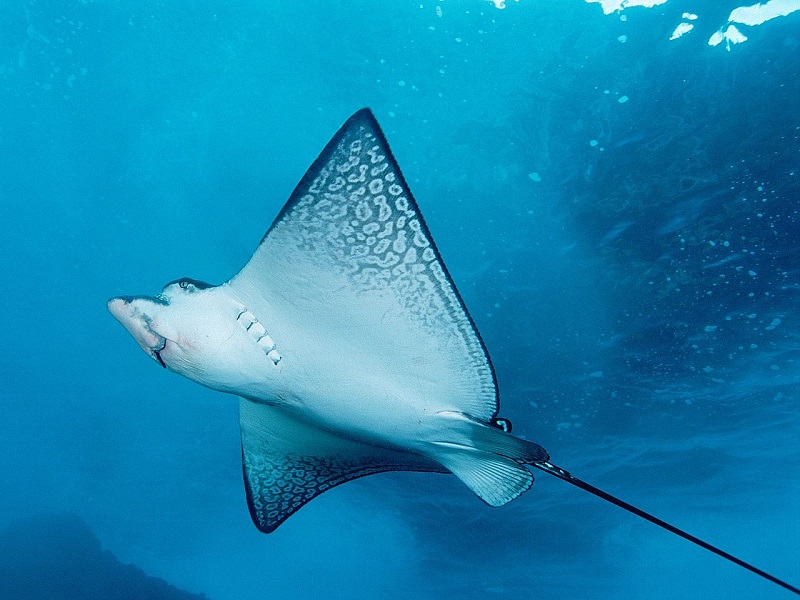 And just for the case that the leopard seals, the salmon sharks or the narwhales give you still somehow the impression that this fits better into colder areas, take a look at this wonderful ocean sunfish (Mola mola): 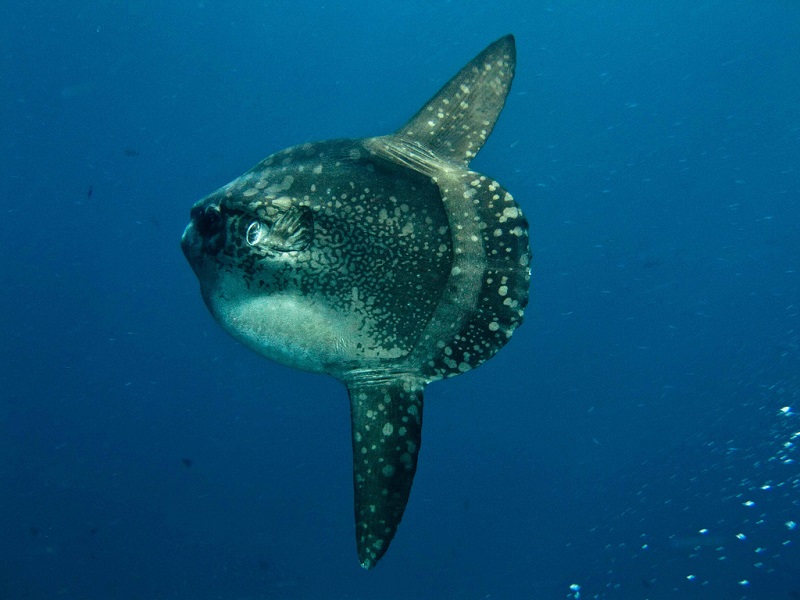 It is also noteworthy that some comparable colour schemes can be even found among some marine snakes.

Of course it is still fully speculative to give a plesiosaur some variation of the shown patterns and colours, and perhaps some of them were really much more colourful in life. But on the other hand it is perhaps still more likely than some fully speculative fancy colours and patterns which we see in no or only extremely few modern marine animals. In any case, the team of kamyk.pl did a really good job when they painted their Meyerasaurus.

Here is also a photo of the original fossil, exhibited at the Museum am Löwentor, Stuttgart: