Swimming with the yellow-finned redfin perches of Lake Constance

Last weekend I visited once again Lake Constance, the third largest lake of Europe, which  is located in the very south of Germany. The northern border belongs mainly to Germany, whereas the southern border belongs to Switzerland. There is even a small part of the border at the eastside of the lake which belongs to Austria.
Lake Constance (better known as Bodensee in German) is a highly interesting place for many reasons. Besides all the cultural and historical sights around, it has also a lot of zoological highlights, like the newly evolving form of sticklebacks which made the news some time ago, or a lot of rare, invasive, endemic or otherwise interesting animals. One of them is an unusual form of the common European perch or redfin perch (Perca fluviatilis). This species has a huge range over vast areas of Europe, and is by far the most common predatory fish around. So far, it was assumed that all those populations belong only to a single species, but recent research has shown that some populations in large alpine lakes could possibly be different enough to be distinct species.

The status of the European perch populations of Lake Constance and some other large lakes in Switzerland is still uncertain, but it is possible that it represents also a species of its own. They visually differ from the normal form in the colouration of the pectoral, ventral and caudal fins, which are partially brightly yellow, whereas those of the common European or redfin perch are (suprise surprise) more or less red. They also tend to have more narrow stripes. But there are also other differences. Since some time red-finned perches are also known from Lake Constance, and also specimens with partially red and partially yellow fins, which most likely represents hybrids between both forms. The yellow-finned form suffers strongly from the gillworm Ancyrocephalus percae, whereas the red-finned perches show a much bigger resistance. The supposed hybrids show a degree of parasite infestation which is in the middle between both forms. You can see some photos of both forms and the mixed form here.

I heared only a comparably short time ago about the special status of the perches of Lake Constance, so I was quite eager to take the opportunity to see some of them when I was visiting the lake. The weather at that weekend was not very good, but the water still comparably warm, so I took my diving goggles and my underwater camera in hope of seeing some interesting denizens of the lake.

I had already seen some smaller perches the two days before at the port of Constance, but I wanted to see them underwater from a closer distance too. It resulted that I didn´t find the perches, but the perches found me. I was still at only knee-deep water when I looked underwater and found that two perches were swimming around my feet. They showed no fear but were quite curious instead. When I was in deeper water, I discovered that this part of the lake was especially and unusually boring, and the bottom only covered by gravel and a single kind of low-growing waterplant. At least I could find some of the many invasive species like zebra mussels, small snails which seemed to be New Zealand mud snails (Potamopyrgus antipodarum) and two partial shedded carapaces of non-native crayfish, either Orconectes limosus or signal crayfish (Pacifastacus leniusculus). 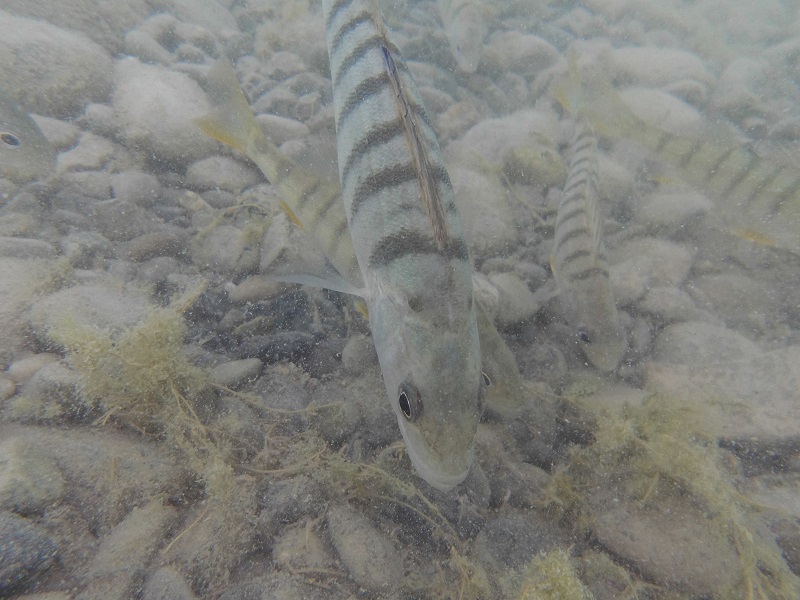 After some time I was swimming again in the more shallow water, and it took only a short time until I was again surrounded by a few perches. I realized they were searching for food where I had whirled up the sediment from the ground, so I intentionally scratched the gravel with my feet. Over time, more and more perches gathered around me, from 5-10 at the beginning to more than 20 at the end. 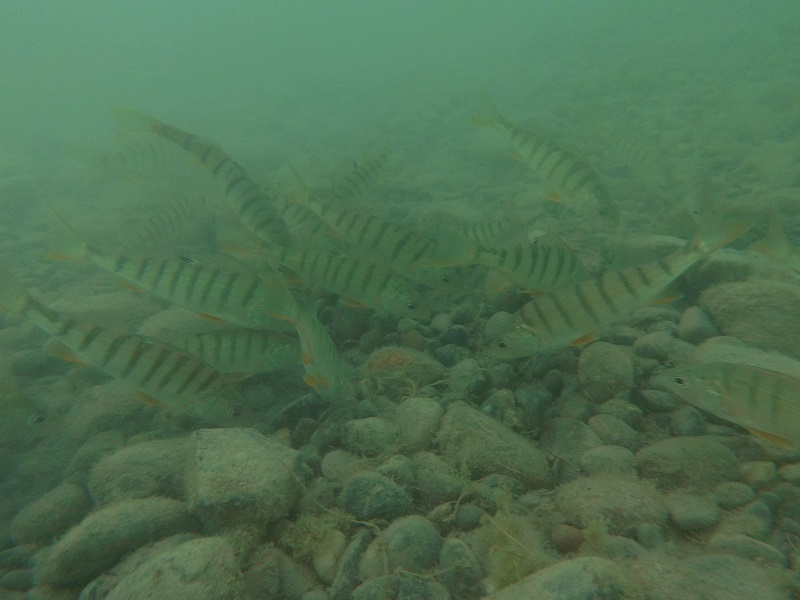 Most of the perches were still comparably small, between 10 and 15 cm, but there were also some bigger ones in the 20 cm range. 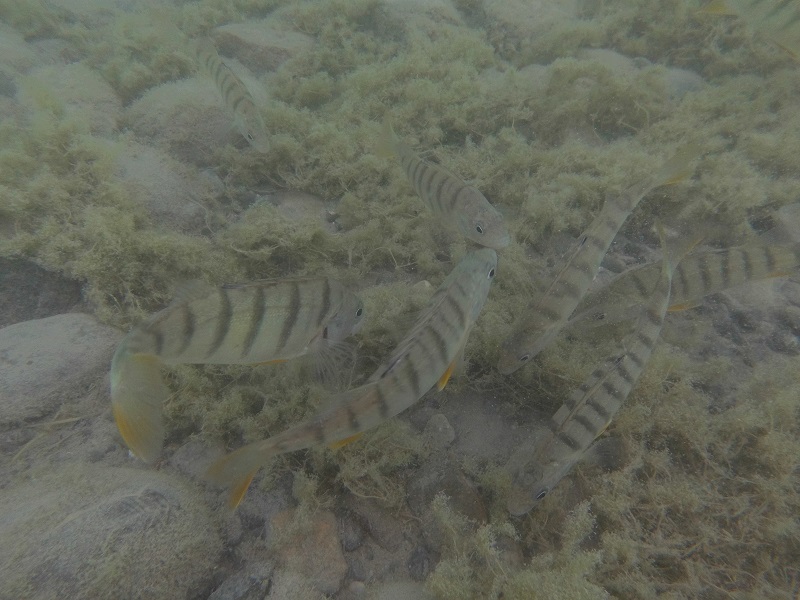 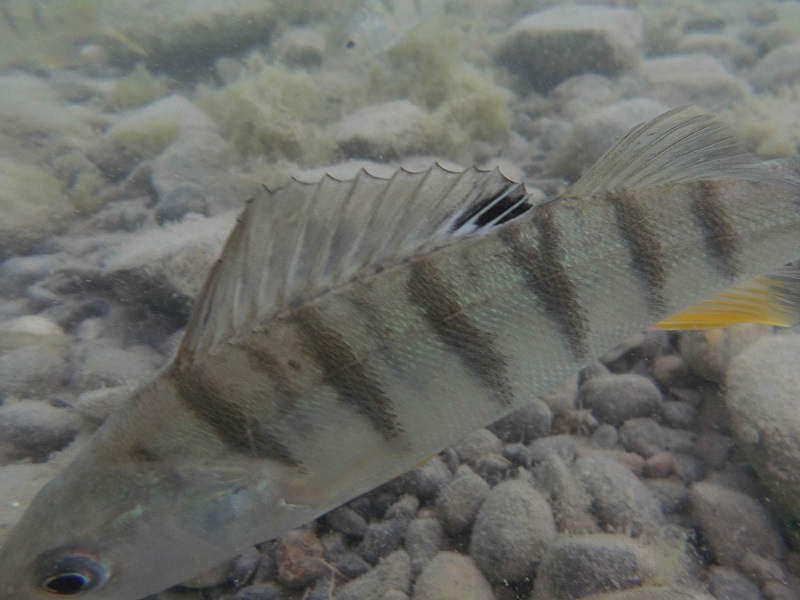 In the middle of the photo one of the perches is feeding on the bottom within a cloud of sediments. 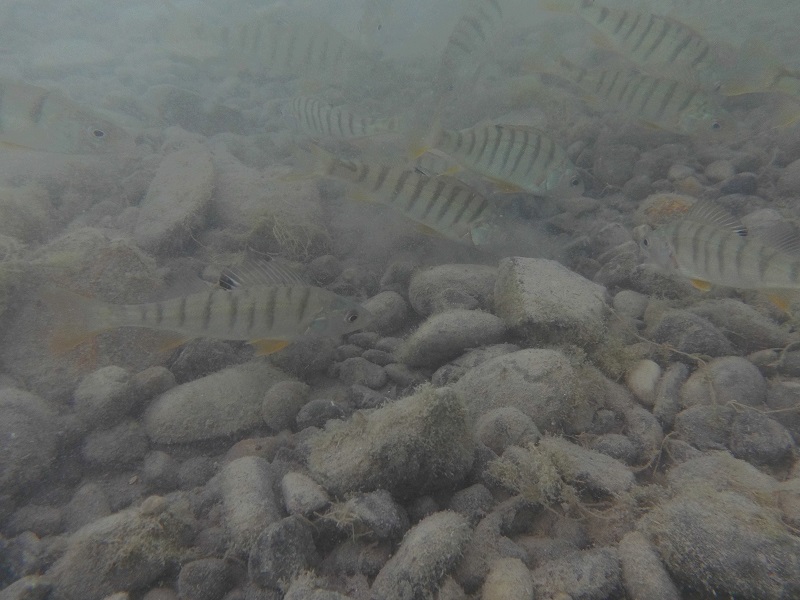 If you look at the different photos you can also see the differences in the shapes of the vertical dark stripes. Some perches have simple single stripes, others have V-or Y-shaped stripes, and some have thin pale stripes between the thick stripes or combinations of all of them. 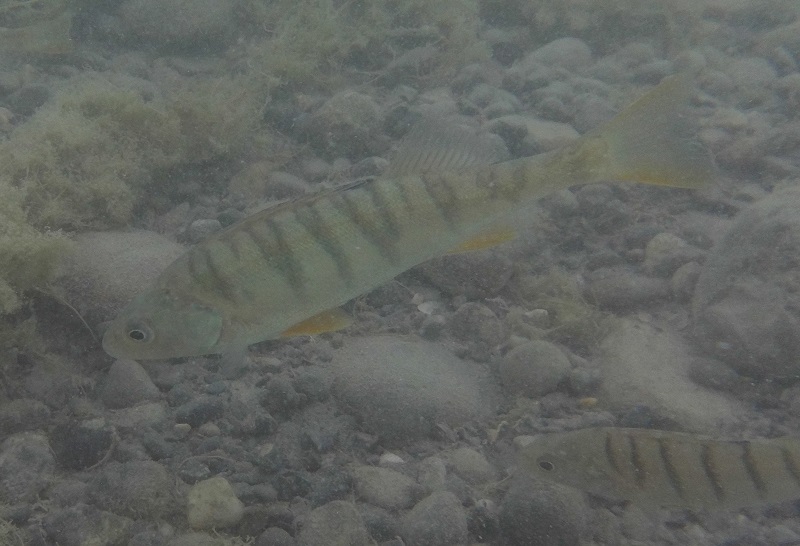 Being surrounded by so many perches was really interesting. I was already swimming with perches in other waters and also other parts of Lake Constance, but this situation was really new to me. 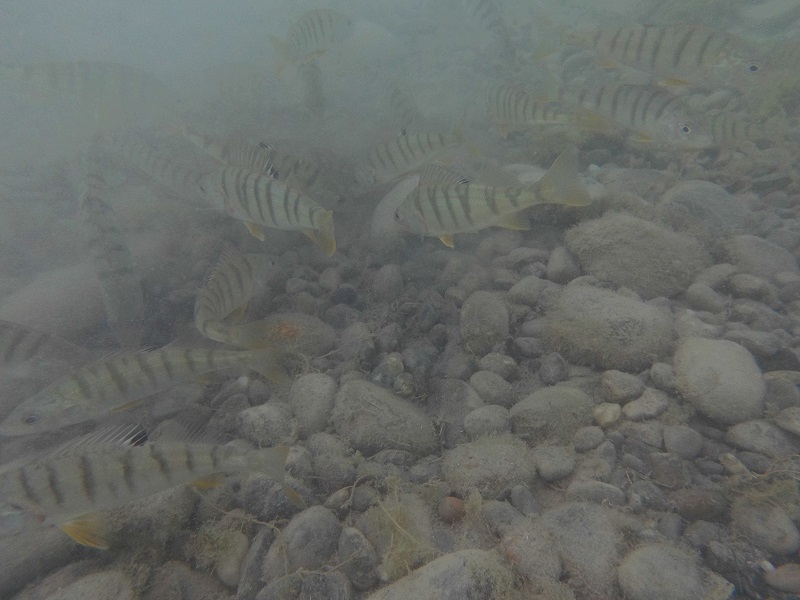 But it was still surprisingly hard to take photos, even from that close distance of sometimes only 10 cm, especially because the water was not that clear. 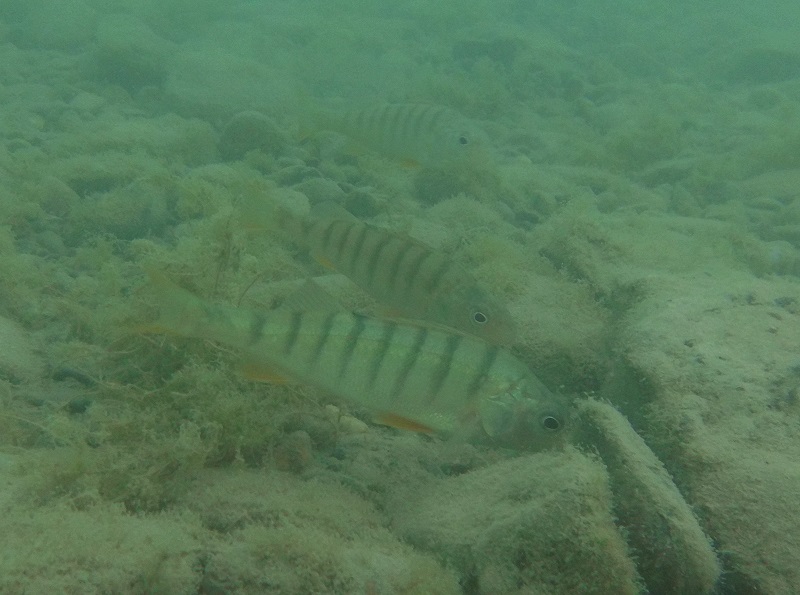 Two or three cyprinids which seemed to be European chubs (Squalius cephalus) also joined the perches. This species is highly omnivorous and opportunistic, and bigger specimens will eat everything from fruits fallen into the water to small fish. 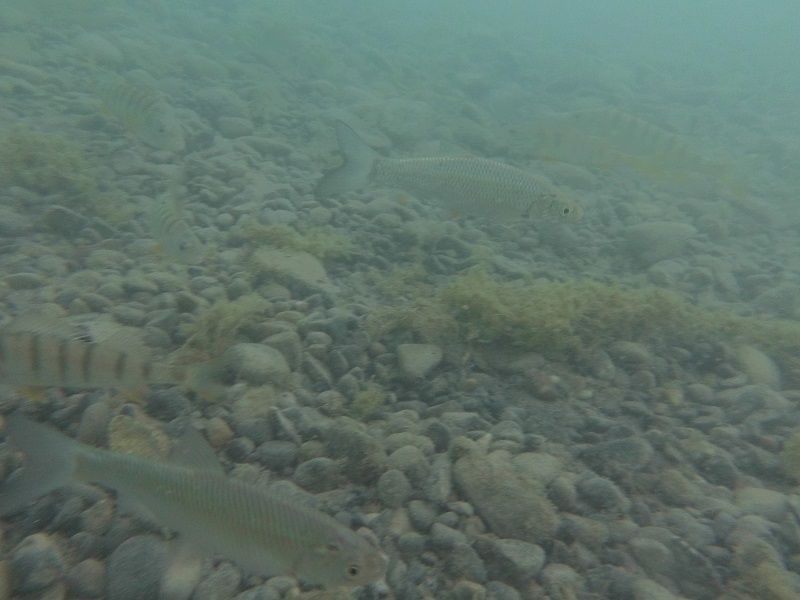 The part of the lakeside where I was in the water belonged to a public bathing beach, and it seems the perches in this area have learned to swim towards people in the water in hope of finding food items around them. This could also explain why I was surrounded by so many perches, as I was nearly the only one in the water at that time.

If you are not familiar with the normal form of the European perch, just take a look at this red-finned specimen from Wikimedia Commons: 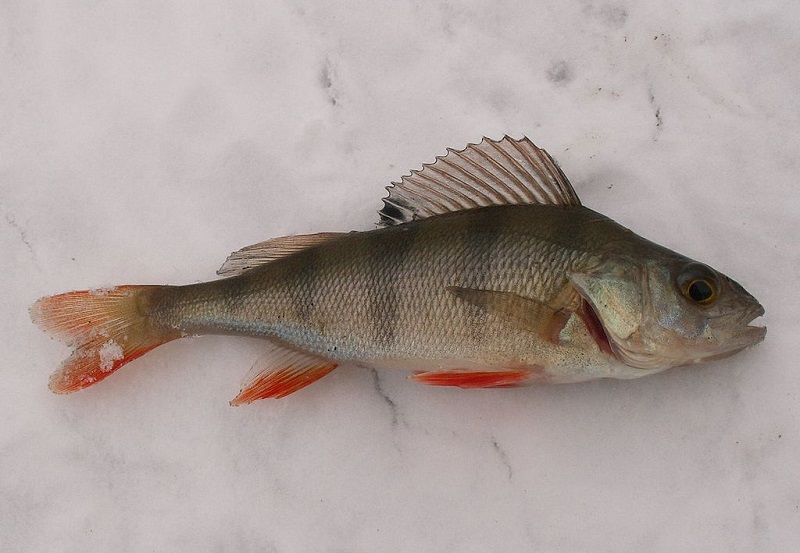 The water was comparably murky, what´s unusual for most areas of Lake Constance and the sky was dull, so the conditions for taking photos underwater were sadly not very good. I really hope I will have some more luck with the weather next summer, to take more photos of the fascinating underwater fauna of Lake Constance. 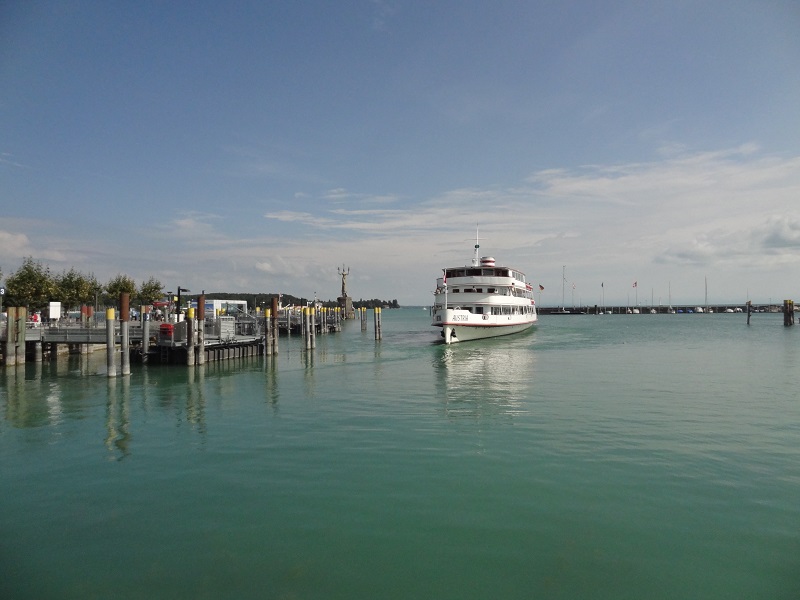